INET Research in a Year of Living Dangerously 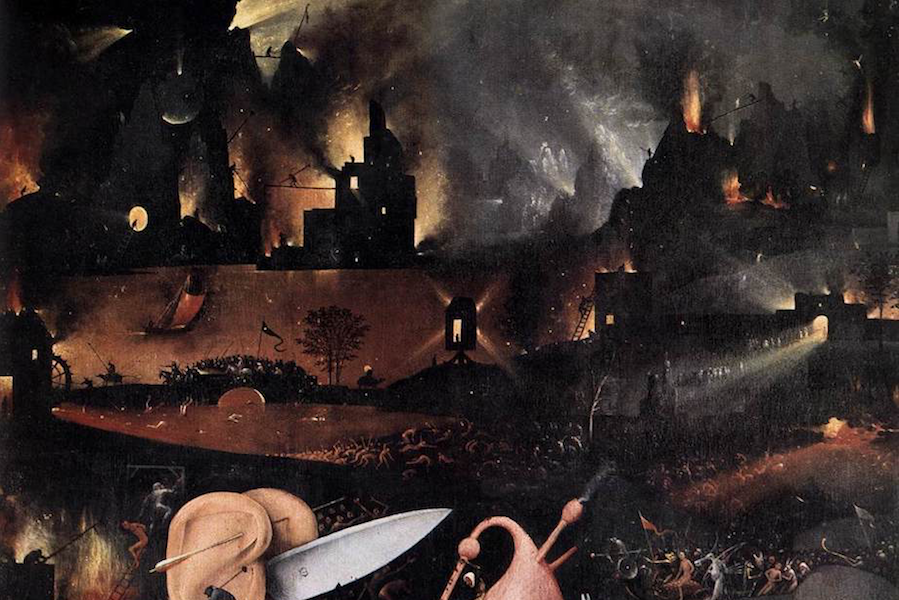 Perhaps the authorities in  ’s-Hertogenbosch in the Netherlands were just lucky. Or maybe, just maybe, history really does proceed in spirals.

In any case, as the infant New Year of 2016 crept in, the art museum in the little town in Brabant was putting the finishing touches on a grandiose exhibition to mark the 500th anniversary of its most famous son, Hieronymus Bosch. As the show opened, who would have suspected that a late medieval painter’s nightmarish depictions of the end of the world and the torments of Hell were about to become visual tracts for our times, presaging the dramatic upheavals now shaking to their foundations two of the world’s oldest democracies – the UK and the US – and threatening to send the Eurozone and perhaps even the entire European Union into a death spiral?

With so many policymakers and elites in the advanced countries stuck in a state of denial – with some even celebrating, save in regard to international trade, a revival of the free market fundamentalism that did so much to bring on the 2008 disaster – it seems like a good idea to look back on some areas over the last year in which the Institute for New Economic Thinking’s research helped bring important themes into focus, and how its work might help advance the wave of reappraisals that now impends.

First a word of caution: INET’s founders set it a simple, yet broad challenge: changing economic theory to better comprehend the course of the economy and the crises imperiling the world economy.

No brief review can do justice to the multiplicity of ways the Institute has tried to accomplish this. INET research covers many areas that are, at best, indirectly related to the turmoil of 2016, and includes many more researchers than can possibly be mentioned here. For example, econometric investigations into short-time series or how to cope with endogeneity in models, as discussed in Irene Hueter’s critical study of latent instrumental variables, will certainly be of great value to researchers, but in this review they have to be left to the side.

Also INET has a number of specialized research programs (including those led by Joseph Stiglitz, Roman Frydman, and James Heckman and Steven Durlauf) that cannot be adequately represented here. The same holds for research at other institutions partnered with INET, such as INET Oxford and INET Cambridge, and INET backed education programs, including the just renovated History of Economic Thought website. Even much of the output from the other main INET Research Programs most immediately relevant, such as the Financial Stability Program — run by Robert Johnson, Adair Turner, and myself — or the Political Economy of Distribution that Arjun Jayadev and I administer, have to be mostly neglected here as we concentrate on work published on INET’s own website in 2016.

The simplest hypothesis to explain the shocking reversals that punctuated the year is that while economists and policymakers battled over the size of multipliers, the limits to debt, and the slopes of imaginary curves, the slow pace of economic recovery exhausted the patience of long-suffering electorates. That, at least, is not an outcome that can reasonably be pinned on INET. From the Institute’s earliest days, a steady stream of papers, blogs, and conferences warned that recovery from the 2008 catastrophe would not happen without serious use of fiscal policy. Adair Turner, Robert Johnson, Richard Koo, Orsola Costantini and many others — including Marc Lavoie and Mario Seccareccia — pressed versions of that case.

Inevitably, this inspired some INET researchers to take a deeper look at the real economics of John Maynard Keynes, which had focused on the central role of aggregate demand in determining national income. Many papers scrutinized the long process by which Keynes’ views were reinterpreted and, ultimately, almost inverted. Lance Taylor produced a particularly lucid and compact study that brought that reversal into pithy focus.

As the green shoots withered and Quantitative Easing failed to bring real recovery, INET encouraged exploration of the roots of “secular stagnation.” Adair Turner offered bold proposals designed to remedy that condition; Barry Cynamon and Steven Fazzari and other analysts debated what growth rates the US economy could reasonably aspire to. Developments since the election of Donald Trump and the sudden conversion of some deficit hawks to advocates of large-scale infrastructure programs make some of these earlier arguments look peculiar: Some Republican-oriented analysts now talk of achieving rates of growth that recall claims mocked in the debates over the economic program put forward by Senator Bernie Sanders. A 2015 INET piece by Cynamon and Fazzari on the impact of inequality on GDP growth now looks prescient

Some of INET’s most acute work in 2016 focused on the Eurozone crisis. Near the start of the year, Servaas Storm started a lively debate on why revival in the Eurozone was not happening. His intervention drew responses from Peter Bofinger of the German Economic Council and Heiner Flassbeck and Costas Lapavitsas. The resulting conversation drew commentary from a number of economists on the INET website and elsewhere.

Antonella Stirati also offered sharp and lucid criticism of Eurozone policies and recent work by Olivier Blanchard. Arturo O’Connell brought many elements of the crisis together, especially the failure to regulate or control runaway capital flows, in a sharp comparison of the Eurozone crisis with earlier cycles of lending and deleveraging in Latin America and elsewhere. Philip Heimburger and Jakob Kapeller examined how the European Union’s own macroeconomic methods and tools contribute to slow growth and stagnation there.

The Structure and Mechanisms of Inequality

Another area to which INET made a major contribution involves a central background factor shaping voter behavior in both the Brexit referendum and the US election: Inequality.  Long before 2016, the Institute made substantial contributions to the World Top Income Database used by Thomas Piketty and other economists. It also supported studies by Joseph Stiglitz, James Galbraith, Lance Taylor, Duncan Foley, and others on the subject, as well as work by James Boyce and colleagues on environmental inequalities.

Sanjay Reddy, Arjun Jayadev, and Rahul Lahoti built an entirely new database permitting studies of consumption in many countries and threw it open to researchers.

In 2016, as in other years, research by William Lazonick and his colleagues cast dramatic new light on the mechanisms of inequality. Lazonick and Matt Hopkins showed that standard ways of assessing executive compensation as reported by the mass media, including the Wall Street Journal and the New York Times, routinely undercount actual levels of corporate CEO pay. Another Lazonick working paper for INET set out his critique of stock buybacks and the role they have played in distorting incentives in US corporations — research that was cited by Vice President Joe Biden in his challenge to America’s corporate leadership.

At a major INET conference on race and economics in Detroit in November, Arjun Jayadev and Robert Johnson’s paper examined the links between economic downturns and the growth of racism. At that conference, Peter Temin also presented findings from his first-order contribution to the literature on inequality, which has adapted W. Arthur Lewis’ “dual economy” model to the contemporary United States Many other notable researchers also spoke on a wide variety of topics that deliberately sought to enrich economic thinking with contributions from other disciplines, including john a. powell and Alexis McGill Johnson.

INET research on climate change focuses sharply on how institutional realities collide with economic theory and ecological imperatives. 2016 saw an interesting and unfailingly polite exchange between Goher-Ur-Rehman Mir and Servaas Storm on one side and Michael Grubb, Annela Anger-Kraavi, and Igor Bashmakov, and Richard Wood, on the other over the vexing question of how far economic growth has decoupled from previous rates of carbon generation.

The Economics of Politics

Many analyses of the stunning results of the Brexit and US presidential votes note the disgust of many ordinary citizens toward what they perceive as indifference to their economic plight by a self-serving elite benefitting from a corrupt and “rigged” political system. Several major INET working papers brought new empirical and theoretical evidence to bear on these questions. Ahmed Tahoun and Florin Vasvari, for example, showed that Congressional representatives sharply increase their borrowing and receive much more favorable terms from lenders after joining committees supervising finance.

In another paper, Tahoun and Laurance van Lent discovered that voting decisions on the bank bailout in 2008 by Congressional representatives were strongly related to the financial positions of the representatives and their spouses: Those who were down in the markets were far more likely to support the bailout, controlling for other possible confounding variables.

Another paper took a close look at the relation between money and elections. Thomas Ferguson, Paul Jorgensen, and Jie Chen show that the outcomes of all Congressional elections for which we have the necessary data – that is, since 1980 – display strong linear relationships to total spending by the major political parties in each race. Drawing on some natural experiments and the Hueter paper on endogeneity and latent instrumental variables mentioned earlier, they also show that this empirical result  — somehow missed by two generations of scholars — is not principally a result of money following polls or public sentiment: though that happens, money has powerful direct effects in its own right.

Various Institute researchers made other notable contributions via a steady stream of paper and blog posts. Lynn Parramore’s interviews and discussions notably widened the reach of the Institute’s research. Salon, Bill Moyers, the Huffington Post and many other major media sites published or adapted pieces she originally published on INET’s website.

Along with several essays in scholarly books, Orsola Costantini organized a symposium on Neoliberalism that attracted wide interest.

Starting in May, Academic Council member Perry Mehrling has been posting regularly on the INET blog, providing critical commentary on the new realities of the international monetary system.

Along with longer studies on inequality, Arjun Jayadev wrote a variety of posts on inequality and an extended essay on Axel Leijonhufvud’s economics

Some things do not change from year to year: The Institute has stayed resolutely focused on financial stability as a theoretical and empirical imperative. In 2016, Edward J. Kane published a striking Working Paper on how too-big-to-fail banks and regulators collude to game the system.

INET also conducted long interviews with a variety of experts. One of these, with Luigi Pasinetti, became something of a sensation, attracting large numbers of viewers. One part of the Pasinetti interviews included Marcello de Cecco, whose untimely death was an enormous loss to economics and especially economic history.

To them, and all the researchers who have contributed to INET in the past year, we are deeply grateful.  Were Hieronymus Bosch around to paint them today, we think they would deserve to be swept up with rest of the small group of the elect that he sometimes painted, off to one side, heading for heaven as the world fell apart.