Visions Beyond the Haunted House 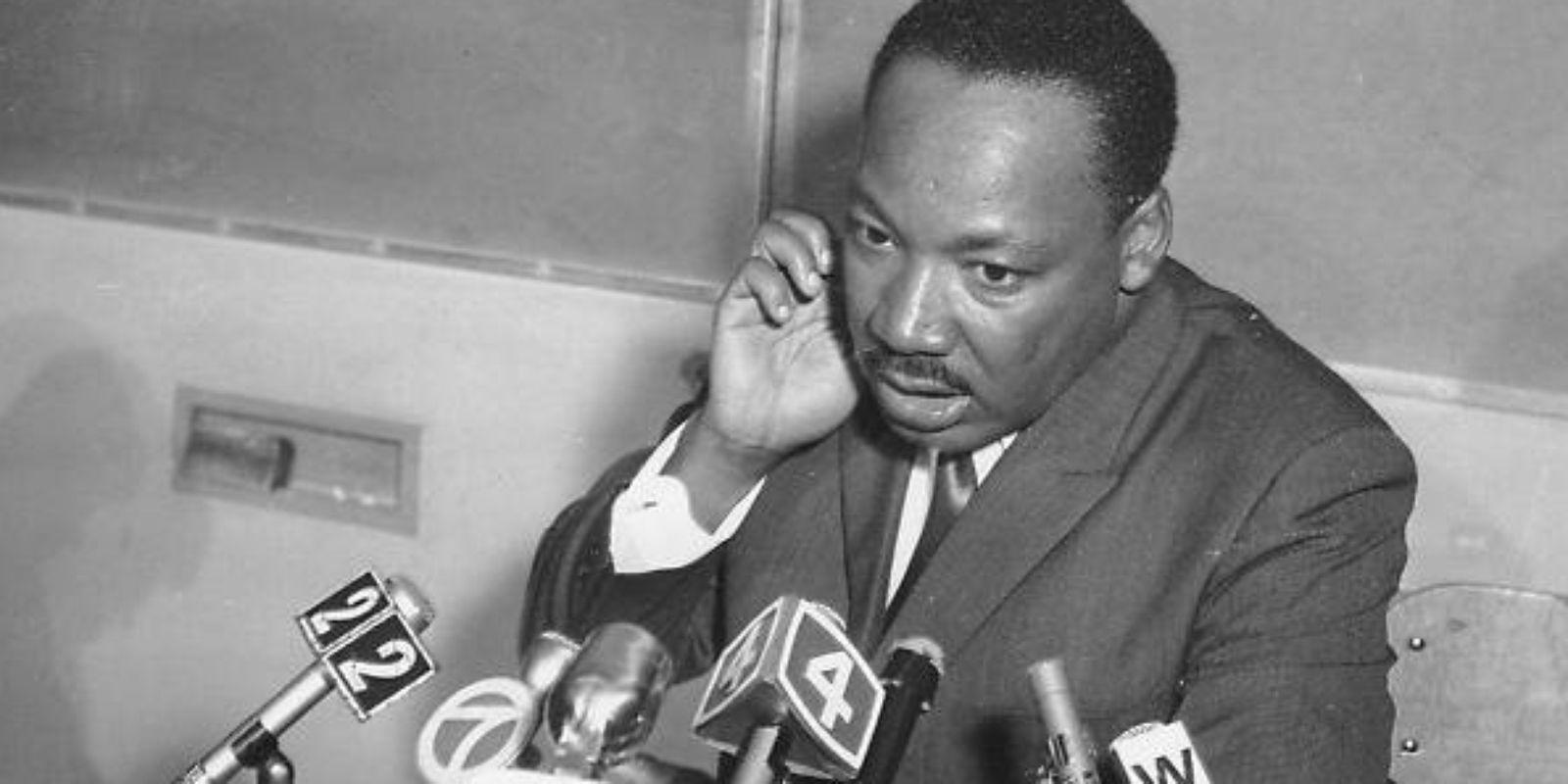 On this day in 1968, King decried the creation of “a kind of socialism for the rich and a rugged, hard individualism for the poor,” and called for “militant, powerful, massive” nonviolent direct action to create a more just society. A half century later, how far have we come?

Fifty years ago today, March 14, 1968, Dr. Martin Luther King Jr. delivered what would be his last formal speech, “The Other America,” at a high school outside Detroit which I would attend four years later. Twenty-one days after the speech, on April 4, King was assassinated in Memphis, where he was due to appear on behalf of the city’s striking sanitation workers.

After seeing some of my father’s sailing friends come by the house and express their rage that he was allowed to speak, my 11-year-old mind was sparked into curiosity. About nine months beforehand, we had heard the gunfire of the race riots in Detroit and seen the tanks, sandbags and troops. I did not understand the tension and I did not at the time understand what King conveyed in the speech, but I knew it was important and frightening. And I knew that my parents, both moderate Republicans of the Gerald Ford variety, were taken aback by the anger surrounding the decision to let King speak.

Turmoil ensued. Anti-King Protesters occupied the lawn of the high school. Audience members aggressively interrupted King during his speech. Afterward, to Jude Huetteman, who headed the organization that invited him to the high school in Grosse Pointe, Michigan, King would confide that the hecklers were among the fiercest he had encountered. All this mayhem heightened my fear and curiosity.

Looking back now and reading the text of his speech, it is clear that there is a great deal to learn from the insights King presented that night. “The Other America” speech painted a vision of a nation with cities divided into “a kind of dualism” that resonates with recent INET research from Peter Temin, and with his book based on that work, The Vanishing Middle Class.

King described deep poverty and structural unemployment. From the vantage point of white people who feared that unrest would interrupt their prosperity or the path to it, these were known as “social problems.” In his speech, King stressed that similar economic conditions endured by white people had caused national outrage and bore the hallowed historic marker, “The Great Depression.”

King challenged false consciousness and false prescriptions for the disease of otherness, which allows a dominant group to target or subjugate “others” deemed outsiders. King advocated “militant, powerful, massive” campaigns of nonviolent direct action to address these challenges. He did not see the race riots in Detroit and Newark in the summer of 1967 as mysterious, but rather as a result of the intolerable conditions that existed in society. The Kerner Commission Report, which had released two weeks before his speech, on February 29, 1968, confirmed King’s assertions—much to the discontent of President Lyndon Johnson. Contrary to the findings of the 1965 Moynihan Report which the President favored, the causes of violence weren’t private pathologies in black families, the Kerner Report found. Rather, the causes were public, political and economic: violence was caused by the combination of racism and the lack of educational and employment opportunity for black people in American cities.

Of course, in the weeks between King’s speech at Grosse Pointe and his assassination in Memphis, President Johnson would himself stun the nation by announcing that he would not seek re-election the coming fall.

All of this proved that the so-called “social problems” most white people wished to see as the private troubles of “other” people were really national, structural, economic issues plaguing the nation as a whole, affecting politics from local school boards to the U.S. presidency.

King went on to challenge the very notion of racism, which he considered a false ontological assertion of superiority: “the nymph of an inferior people.” In fact, his speech challenged a series of inter-locking myths. First, he objected to the idea that time would heal these wounds all by itself. Instead, King countered, such a passive reliance on time “itself becomes an ally of the primitive forces of social stagnation,” he said. Second, he decried the myth that private reliance on a change of heart would eradicate racism without new, public, legislation and aggressive enforcement of those laws. “It may be true that laws cannot make a man love me, but it can restrain him from lynching me,” he said.

Third, he dealt with the myth that we could overcome racism individually, with what he called “the bootstrap philosophy.” King described the context and history of African Americans and of slavery, and explained how support for economic development for white immigrants to the U.S. contrasted drastically with the lack of social investment in black Americans after the end of slavery. He described a government that had, in effect, created “a kind of socialism for the rich and a rugged, hard individualism for the poor.” And, of course, historically as well as in the late 1960s, poor blacks faced an array of racist obstacles, both legal and illegal, in addition to those poor whites faced in the United States.

It’s a grim fact, indeed, that on this same day, in 2018, the 10th anniversary of the Bear Stearns bailout in 2008, King’s language reads more like contemporary news than history from a bygone era.

In his speech that night, members of the audience protested vociferously when King challenged them by describing the evils associated with the war in Vietnam alongside the failure to fight racism and poverty at home. When protesters objected, King declared, “I have been working too long and hard now against segregated public accommodations to end up at this stage of my life segregating my moral concern.”

This is the Martin Luther King Jr. who declared: “Ultimately a genuine leader is not a succor for consensus but a mold of consensus.” This is the Martin Luther King who was called An Inconvenient Hero by his friend Vincent Harding, and who in the last three years of his life saw a deeper need for change to combat the triad of militarism, materialism and racism. This is a man who refused to operate in “the context of no context,” and who instead engaged with history and ideas.

Reading this speech today is a good lesson to young scholars about the nature of the challenge of social science, and what is lost when we acquiesce to a cowardly approach to investigation under pressure from frightened institutions. It is a good lesson on how the wrong approach to intellectual inquiry fosters avoidance and therefore silences. This path contributes to failures of expertise and a loss of legitimacy, trust and influence for those who are asked to serve society.

What I felt listening to King address his supporters and his opponents in Detroit that night and the loss of innocence that ensued marked my life forever. It ignited a skepticism regarding what I’ll call “fake analysis.” As I went on to university, for example, equilibrium economics felt like an assumption of a happy ending rather than analysis. Detroit, meanwhile, was really tense in those days. Riots, union-management violent conflict, and Vietnam War protests fueled unsettling cauldrons in my mind. These were formative experiences for me, and they continue to shape and challenge my vision of how society evolves—or doesn’t.

What concerns me now is that, in the realm of financial reform 10 years after Bear Stearns, and in the world of racial tension 50 years after King’s assassination, we do not seem to be making much progress. In fact, as Peter Temin artfully analyzed, the black despair and rage that King described in 1968 now describes a much larger segment of society, as living conditions deteriorate for so many. I believe that the election of President Donald Trump is a direct consequence of these failings.

Today, when we create, promote, and justify otherness across racial, gendered, and ethnic lines, we destroy our humanity. When we tolerate any human being treated as “other,” I sense that we subconsciously become more anxious. That is because we become internally aware that, some day, the notion of “other” will change. Each of us could become the outcast “other.” When we live with that subconscious fear, we all live in a haunted house. None of us should have to live in a haunted house.

Reading these wise words from King delivered at my high school 50 years ago, along with the vicious opposition he encountered among my family’s neighbors, reminds me of my own history and calls me to define my life’s purpose. I did not begin to comprehend the speech at the time. But, while I couldn’t possibly have imagined how immediately lethal the dangers to King’s life were, I could feel the context, its endangered clarity, its embattled truth. King’s words and example are a beacon of how to address the kinds of challenges we face today. King remains a guiding light. He shed light in his last years on the truth that economics is at the core of anxiety, racial animosity and the nightmare of otherness. King’s messages make it clear that to heal our society and restore a faith in the capacity of human agency, economics must go deeper. We all have to go deeper.