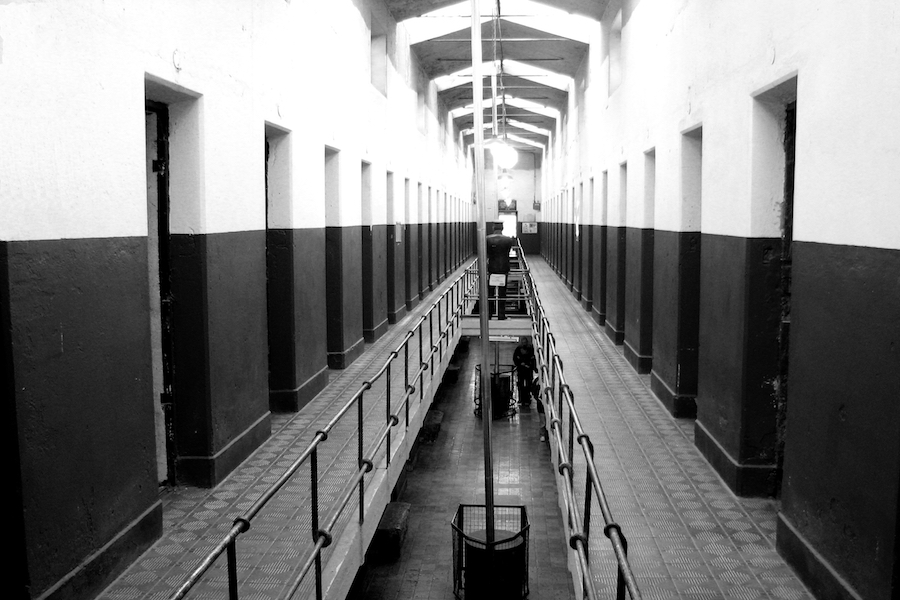 A new model probes why the US leads the world in jailing and imprisoning people, and what it will take to reverse course

Mass incarceration in the United States has mushroomed to the point where we look more like the authoritarian regimes of Eastern Europe and the Middle East than the democracies of Western Europe. Yet it vanished from political discussions in campaigns in the 2016 election. In a new INET Working Paper, I describe in detail how the US arrived at this point. Drawing on a new model that synthesizes recent research, I demonstrate how the recent stability in the number of American prisoners indicates that we have settled into a new equilibrium of mass incarceration. I explain why it will hard to dislodge ourselves from this damaging and shameful status quo.

Mass incarceration started from Nixon’s War on Drugs, in a process described vividly by John Ehrlichman, Nixon’s domestic-policy adviser, in 1994:

The Nixon campaign in 1968, and the Nixon White House after that, had two enemies: the antiwar left and black people. You understand what I’m saying? We knew we couldn’t make it illegal to be either against the war or black, but by getting the public to associate the hippies with marijuana and blacks with heroin, and then criminalizing both heavily, we could disrupt those communities. We could arrest their leaders, raid their homes, break up their meetings, and vilify them night after night on the evening news. Did we know we were lying about the drugs? Of course we did.

This was the origin of mass incarceration in the United States, which has been directed at African Americans from Nixon’s time to today, when one third of black men go to prison (Bonczar, 2003; Baum, 2016; Alexander, 2010).

Federal laws were expanded in state laws that ranged from three-strike laws to harsh penalties for possession of small amounts of marijuana. The laws also shifted the judicial process from judges to prosecutors, from the courtroom to offices where prosecutors pressure accused people to plea-bargain. The threat of harsh minimum sentences gives prosecutors the option of reducing the charge to a lesser one if the accused is reluctant to languish in jail awaiting trial—if he or she is unable to make bail—and then face the possibility of long years in prison. And the shift of power was eased by the pattern of financing. Prosecutors are paid by localities, while the costs of prisons are borne by states. The trip to the penitentiary does not cost prosecutor at all. “Instead of juries and trial judges deciding whether this or that defendant merits punishing, prosecutors decide who deserves a trip to the nearest penitentiary (Stuntz, 2011, 286; Pfaff, 2017, 127).”

Both political parties were engaged at different times in legislation that gave rise to mass incarceration. It would seem likely that they could get together to try to reduce the rate of incarceration, but the prospects are not good in our current political impasse. The reduction of incarceration always has some risks, and political figures are very risk averse. Some people want to reduce the cost of prisons to help fund other government programs, but they have not produced many proposals to accomplish this goal or how to allocate the gains.

Imprisonment in America is concentrated among young, poor—dominantly minority—men and (to a lesser extent) women who come from impoverished communities. The way these young people cycle through our system of prisons and jails, then back into the community, leaves considerable collateral damage in its wake. Families are disrupted, social networks and other forms of social support are weakened, health is endangered, labor markets are thinned, and—more important than anything else—children are put at risk of the depleted human and social capital that promotes delinquency. After a certain point, the collateral effects of these high rates of incarceration seem to contribute to more crime in these places. Crime fuels a public call for ever-tougher responses to crime. The increasing way in which the face of criminality is the face of person of color contributes to an unarticulated public sense that race and crime are closely linked. The politics of race and justice coexist malignantly, sustaining an ever-growing policy base that guarantees new supplies of penal subjects in a self-sustaining and self-justifying manner (Clear, 2007, 175).

We seem to be in a new equilibrium. It took forty years to get to this point, and it may take at least that long to get back to what we can consider a normal incarceration rate typical of advanced economies. We have not yet started down that road.