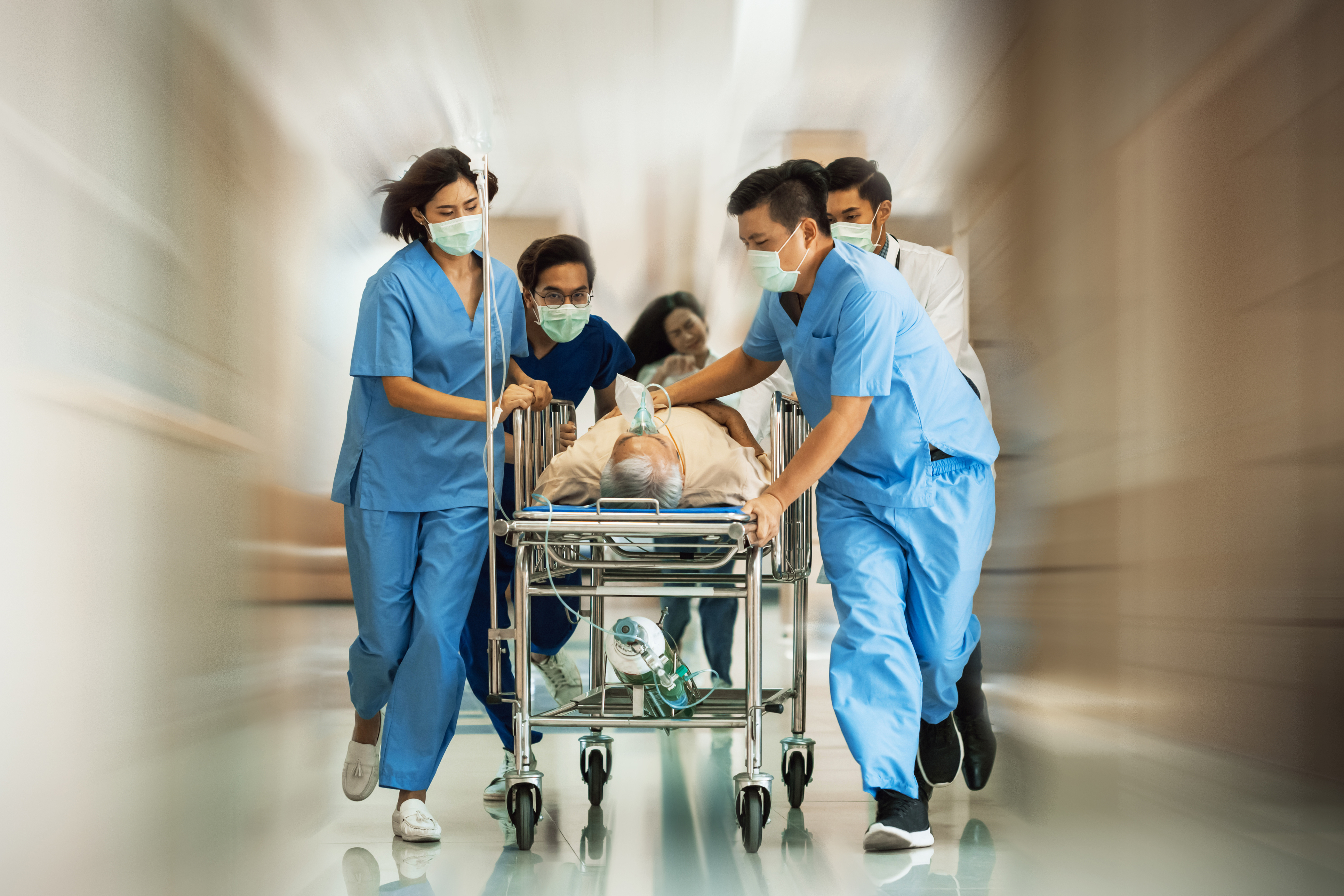 Dr. Ming Lin complained about Covid-19 safety measures at his hospital. He got fired because a giant Wall Street firm called the shots.

Ever had a long wait in the emergency room?

Get hit with a medical bill you didn’t expect?

Fed up with a healthcare system focused on your wallet more than your well-being?

If you’re like most people, you’ve been wise to the fact that dollar-squeezing corporations and life-saving medicine don’t exactly go well together. When the bottom line is the top priority, patients are viewed as geese to be plucked and medical staff as dependent workhorses. The cost of healthcare goes up and quality goes down.

But you might not realize that it’s gotten even worse thanks to the private equity industry. Think of it as corporate medicine on steroids. In this model, doctors are “good” only if they generate steep profits for executive pockets. That goes for patients, too.

Private equity firms have also taken over companies that staff hospitals, provide home healthcare, run nursing homes, and just about everything else connected to your health. The outcomes are just as concerning.

Take private equity firm KKR, which owns 15 health care companies, including Tennessee-based Envision Healthcare, a staffing company. According to the Private Equity Stakeholder Project, a watchdog organization, Envision is one of two big medical staffing firms associated with the problem of surprise medical billing in the United States. Its performance was so poor during the pandemic that it has considered filing for bankruptcy.

Bloomberg reports that the company found itself sinking under a $7 billion pile of debt following KKR’s takeover in 2018, and was unable to deal with the decrease in elective surgeries brought on by the coronavirus.

So why would a company taken over by a private equity firm face bankruptcy? After all, private equity proponents claim that the firms help businesses do better.

Researchers Eleanor Kagan and Eileen Appelbaum aren’t buying it. They note that often the private equity firm doesn’t care if it drives a company into bankruptcy because hefty fees and other tricks allow it to make money whether or not a company succeeds. She points to the case of Toys “R” Us, which ended up in bankruptcy — with tens of thousands of employees laid off with no severance — while the private equity firms that took it over brought in hauls of $15 million each in transaction fees.

What exactly do these firms do that makes them so problematic?

Private equity firms buy up distressed companies, often with borrowed money, usually hoping to make them more profitable so that they can eventually be sold at a tidy profit. Investors in these firms tend to be wealthy people and institutions, like pension funds or university endowments, looking for higher returns on their money than they would get on a public stock exchange.

Critics charge that too often, private equity firms get sneaky about driving down the price of a company before buying it. Then, once they get hold of a company, they take over the management (possibly in an area they know little about), often charge ridiculous fees, load the company up with debt (which the private equity firm isn’t liable for!), sell off assets, and send workers packing. All in the name of profitability. When private equity firms take over, critics complain, they aren’t concerned about relationships with long-time employees or the company’s standing in the community, but remain laser-focused on extracting as much money as possible and then leaving town, often with wreckage in their wake. In hospitals, for example, the spare capacity that you need for pandemic emergencies is just an overhead cost to be cut ruthlessly.

Sounds a bit like maximum profits for the few and maximum suffering for the rest. Detractors call it “vulture capitalism.”

Dr. Ming Lin knows firsthand how private equity impacts hospitals. At the beginning of the pandemic, he was working as an emergency physician at PeaceHealth St. Joseph Medical Center in Bellingham, Washington. Alarmed about inadequate safety measures to protect staff and patients, Lin complained through internal channels but found that his concerns went unanswered. So, he took to social media to share them. Lin was subsequently fired from a job he had held for 17 years.

The Blackstone Group is the Tyrannosaurus Rex of private equity, the biggest such firm on the planet, gobbling up so much real estate it is also now the world’s largest corporate landlord. It has been accused, among other things, of snatching up people’s homes during the housing crisis and operating them as a slumlord. Blackstone’s CEO Stephen Schwarzman is known for things like throwing himself a $3 million birthday party and comparing raising taxes on his industry to Hitler invading Poland.

Blackstone-backed TeamHealth offered to find Lin a new position in another state, or lower-paid, part-time work as a floating ER physician at other Washington hospitals. Lin refused to be cowed and is fighting back with a lawsuit against both PeaceHealth and TeamHealth.

He is one of a growing number of doctors speaking out about their belief that private equity firms and their cutthroat corporate profiteering do not belong in medicine, and that their presence is a threat to America’s health.

Since the pandemic has highlighted the weaknesses of a healthcare system in which patients often can’t get what they need and doctors wind up fearful of being pressured to violate their own standards, I ask Lin if we’ve had a wake-up call.

“We should have,” says Lin. “Of all the rich countries, the U.S. probably has the worst healthcare system in the world — inefficient and expensive. And where is all this money going to? Physicians get paid pretty well in this country, but on the other hand, pay has been stagnant for the last decade or two. When you look at rising costs, it’s not going to physicians.”

Lin says the money is largely going into corporate pockets.

As a doctor, his realization that money was influencing the system in dangerous ways came gradually. “You’re admitting patients, then somebody tells you not to admit a certain patient because insurance or Medicare won’t pay it,” he explains. “Other times, the patient begs you not be admitted because last time their insurance didn’t cover it and they had to pay $10,000 or $20,000.”

Lin thinks the role of insurance companies in medicine is destructive: “Health insurance is a big part of corporate medicine and I’ve come to think of it as a scam,” says Lin. “The high deductibles — you can go broke just paying your deductible. There’s surprise billing. It’s a mess.”

But during the course of his lawsuit and research into the subject, Lin has realized that there’s a lot more complexity in corporate medicine than just surprise billing and health insurance corporations. “The presence of private equity is making things worse,” Lin warns. “There’s now a grassroots movement amongst some doctors to try to push private equity out of medicine and to get due process for physicians.”

Lin is worried that the safety of patients is getting tossed aside. “It used to be that doctors and directors of hospitals were focused on making everybody safe,” says Lin. “But when you work for a private equity company, you want to preserve that contract. If a patient’s safety is a concern, a doctor may feel pressured not to report it. You may be reprimanded if you do.”

Lin paints a disturbing picture of an incentive structure negatively impacting care. “Let’s say there’s a bad or negligent surgeon,” says Lin. “As an ER doctor, you don’t want to refer your patients to that person. But the hospital rule might be that you have to refer patients to that surgeon no matter what, and if you speak out, you might get in trouble because the hospital doesn’t want anybody to know. If the surgeon is making a lot of money for the hospital, then why would it want to get rid of them?”

Lin notes that it used to be that the decision about a doctor’s competence was made by the medical staff at the hospital. But the hospitals, under the influence of private equity firms, have found ways to control the staff and ensure that money-making doctors continue to practice, even if they are incompetent. Lin would like to see more independence among physicians “so they can say hey, so-and-so is not mentally, emotionally, or physically competent to practice.”

“And it’s not just medicine that gets compromised,” complains Lin. “In trying to get media attention for this issue, I’ve become aware that the media is compromised – publishers are unwilling to print stories even when the editors want to. The law is compromised. Professional organizations are compromised. So what chance do we have?”

Lin points out that the constraints Americans face when they speak out against corporate behavior can be just as repressive as what we think of happening under authoritarian regimes, like China. “It’s actually kind of similar,” says Lin. “Doctors can lose their jobs and their livelihoods if they don’t retract their statements or apologize. In my experience, HR doesn’t investigate or take complaints seriously. HR sees its job as putting out the fire.”

Lin considers himself one of the lucky ones. He misses practicing emergency medicine and doing direct patient care, but feels fortunate that he has a job doing administrative work and supervising emergency rooms for the Great Plains Indian Health Service. “Others who complain aren’t so lucky,” says Lin. “If they get fired, they may have a very hard time finding another job.”

Maybe it’s time for America to find another healthcare system? Preferably one without Wall Street honchos calling the shots.