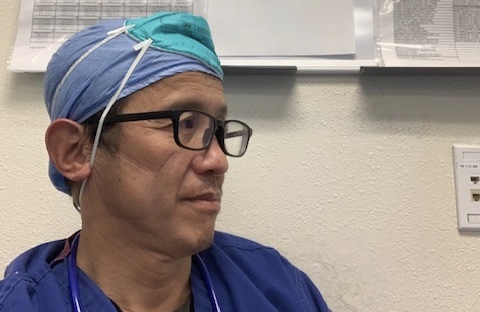 Dr. Ming Lin spoke out about Covid safety at his hospital and was fired. He’s fighting back against a system that put profits over human life.

When the pandemic unleashed its deadly havoc on the world, Dr. Ming Lin was an emergency physician at PeaceHealth St. Joseph Medical Center in Bellingham, Washington — a frontline hero in the battle against coronavirus. But soon he saw that safety measures were not enough to keep either his patients orthe hospital staff safe.

In March, Lin went public with his concerns on Facebook. Soon after, in a move that has been widely condemned, he was terminated from a position he had held for 17 years. The signalto frontline health workers across America was unmistakable: Speak out about safety and you risk your job.

TeamHealth, a corporation owned by the private equity company the Blackstone Group, which contracts with hospitals to staff emergency rooms, offered to find Lin a new position in another state, or lower-paid, part-time work as a floating ER physician at other Washington hospitals. Unwilling to accept these conditions or uproot his family, including three smallchildren, Lin did not accept these offers. Instead, he is fighting back: The American Civil Liberties Union of Washington is representing him in a lawsuit against both PeaceHealth and TeamHealth.

Lin shares his alarming story and what it means for workers everywhere with the Institute for New Economic Thinking.

Lynn Parramore: Let’s start out with a bit about your background. Why did you decide to become an ER doctor?

Ming Lin: I grew in Galveston, Texas, which was a pretty racially and economically diverse community, mostly consisting of Blacks, Hispanics and whites ranging from poor to upper middle class at best. Considering its diversity, it was integrated as best as one could expect. There was only one high school and it seemed everybody who grew up there spoke with the same Tex-Mex , Black American dialect.

My interest and desire to become an ER doctor really did not start until I did my first rotation in the emergency room at the University of Texas at San Antonio. It was, at the time, a relatively new specialty striving for respect, but there were many elements which I loved. For one thing you got to see cool things. And you never had to be on call and never took your work home with you. I also loved that every patient to me was like a complex social, emotional physical puzzle. And I love puzzles.

But what I truly loved about emergency medicine is the diversity of the patient population and that despite their racial or economic background, everybody was treated the same based on their symptoms and severity of illness. Rarely was there such a thing as a VIP patient, unless it was one of our own staff members, and never did the financial aspect cloud our judgement. This diversity also extended to the staff who worked in the Emergency Department. People who work in the ED come from all walks of life, very much like the population we serve, and we all bond as a team to give the best care we can. It is like a second family to me.

LP: You were dealing with the Covid crisis early on. How do you judge the U.S. response?

ML: Seeing what was happening in Asia and Europe as the pandemic took off was extremely concerning. It was obvious to me that a storm was headed our way, I just was not sure how it was going to play out. But I knew we were in for a long ride. It was a bit frustrating to see that we had stumbled in our ability to obtain rapid testing and that we were not advocating for masks early on. Those measures were, after all, effective in slowing the past Spanish flu pandemic in 1918. Instead of implementing preventative measures to limit transmission, we were more focused on ventilators, which carried an extremely high mortality rate. This is not including the disability you would suffer if you survived 30 days on the ventilator.

LP: What were those early days like in Washington state, in terms of the safety of patients and occupational health issues?

ML: Being only 75 minutes from the initial epicenter, Seattle, it did feel a little like we were sitting ducks waiting for a disaster to happen. I could see that other hospitals were doing more to protect their staff, patients, and community from infection, and many of us were resigned to the fact that we did not have adequate protective equipment to safely manage a massive flow of sick Covid patients.

What I found most frustrating was the lack of adequate measures to limit transmission of the virus to protect our patients and medical staff, such as temperature screening and social distancing, among other things. At the time, healthcare workers probably made up the largest proportion of those testing positive for Covid, and yet we were doing the minimum to prevent the transmission to our patients and each other. Advocating for clean hands while our mouth and nose were exposed to this airborne organism did not seem to make sense to me.

LP: Why did you feel compelled to speak out and why did you choose to voice concerns on Facebook?

ML: Obviously, a pandemic was approaching, and I had serious concerns about the health and safety of our patients, staff, and community. I knew I could not be silent, so I tried to address the subject through internal channels, but my concerns weren’t taken seriously. I had seen this before when I reported my concerns about racial and sexual discrimination, which were also ignored. I felt it was important to use whatever measure necessary that was going to implement change as rapidly as possible.

Looking back, I do feel that using social media was effective in elevating my safety concerns and causing the hospital to make changes. I can name almost a dozen safety measures I asked our hospital to adopt to improve safety among our healthcare workers, and the hospital eventually did adopt them shortly after I raised the issue publicly.

It was beneficial to the safety of staff and patients for me to express my safety concerns in a method that is transparent and well documented.

LP: Your case raises questions about protections for whistleblowers, which vary depending on factors like where they live, employment status, and so on. What has it been like for you?

ML: I can’t speculate about the legal protections available to all healthcare workers, but for me, I wanted to give the best medical advice I could give, and I’m dealing with the consequences now and addressing them in my lawsuit against TeamHealth and PeaceHealth as my joint employers.

LP: You are suing both PeaceHealth, the hospital where you worked for 17 years, and also the physician staffing firm TeamHealth, which was technically your employer. TeamHealth is owned by the private equity company the Blackstone Group. There has been a lot of criticism of the increasing role of private equity firms in healthcare. What’s your view?

ML: Emergency physicians in the past have been among the strongest patient advocates, especially for those who are financially challenged. We demand from hospitals that patients be treated equally, and receive the best care possible without regard to financial consequences. Corporate medicine has made it difficult for us to speak out for patient safety, and my situation during this is an example of that as PeaceHealth and TeamHealth placed their image and corporate relationship over health and safety.

LP: What has life been like for you since your termination?

I would say emotionally there have been a lot of ups and downs. There is such a need for skilled medical professionals in communities of color right now that I couldn’t wait on the sidelines, so I have been able to secure some temporary work with the Lakota Indian Tribe in Rosebud, South Dakota. It has been an honor serving the native population and learning about their rich and diverse cultural history.

Despite this, I do miss the diversity of people and friends I have been working with for the last 17 years.

LP: Now that we’re many months into the pandemic, how safe do you think healthcare workers are today? Is it any safer for workers to speak out if they are concerned?

ML: I think as a country we are more aware of the issues concerning healthcare worker safety and as a result more measures have been implemented by hospitals to protect healthcare workers. While the public lauds us as heroes doing battle, we are not always equipped with the protection we need to fight safely under the circumstances. This, not to mention the emotional aspect of constantly being exposed to Covid and not knowing when you or your family member may get ill.

People rely on the advice of doctors to keep them safe during times of crisis, and I think hospitals should listen, too. Sadly, I know my story isn’t unique. I’ve been contacted by healthcare workers all over about harsh policies that censor their right to speak about patients’ safety. The only reason my situation has garnered so much attention is because of the support of the diverse community of friends I have made over the years. They are the ones who held strikes in front of the hospital on my behalf, started a petition to rehire me, and helped me connect to lawyers and the ACLU so that I can bring this problem to national attention. For this I am grateful.

LP: What do you think the lessons of the pandemic are for the organization of medicine, patients, and health care workers?

ML: This pandemic obviously exposed the inadequacy of our public health system as well as the inequalities in our healthcare system. It is disheartening to see the direct correlation between race and economic standing with Covid infection and death. Although we may disagree on how to best manage this pandemic, we should all at least agree that our country’s inability to control a virus is a concern for our national security as well as our countries standing as a world leader and that we should come together to address this crisis.