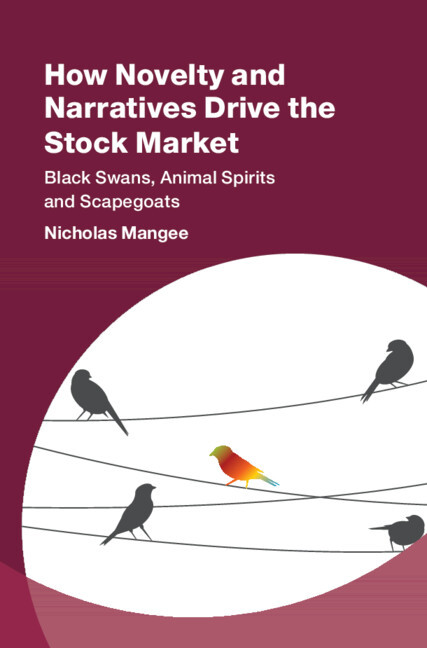 ‘Animal spirits’ is a term that describes the instincts and emotions driving human behavior in economic settings. In recent years, this concept has been discussed in relation to the emerging field of narrative economics. When unscheduled events hit the stock market, from corporate scandals and technological breakthroughs to recessions and pandemics, relationships driving returns change in unforeseeable ways. To deal with uncertainty, investors engage in narratives which simplify the complexity of real-time, non-routine change. This book assesses the novelty-narrative hypothesis for the U.S. stock market by conducting a comprehensive investigation of unscheduled events using big data textual analysis of financial news. This important contribution to the field of narrative economics finds that major macro events and associated narratives spill over into the churning stream of corporate novelty and sub-narratives, spawning different forms of unforeseeable stock market instability.

Nicholas Mangee is an associate professor of finance in the Parker College of Business at Georgia Southern University and a research associate for the Institute for New Economic Thinking (INET) program on Knightian Uncertainty Economics (KUE). My research focuses on testing the implications of macro-finance models based on KUE by investigating the relative roles and dynamics between market fundamentals, psychology, and social context in explaining instability in stock price fluctuations. I earned my doctoral degree at the University of New Hampshire. My research has received attention from financial press outlets such as The Economist and Bloomberg News and has been featured prominently in the book Beyond Mechanical Markets: Asset Price Swings, Risk, and the Role of the State - a 2011 finalist for the Paul Samuelson Prize.

Nicholas Mangee's How Novelty and Narratives Drive the Stock Market: Black Swans, Animal Spirits and Scapegoats is an important book. It gives a theory of uncertainty that completes a project begun by Keynes long before The General Theory and overthrows the standard approach to uncertainty in economics. Its study of narratives, multiple equilibria, and use of machine learning to extract the contents of narratives from financial reporting is certain to be of wide interest and is a real contribution to economics.

It is a fact of life that stock market returns, along with the innovations that frequently drive them, are the outcome of unrepeatable and unforeseeable changes — unforeseeable not in the same way as roulette outcomes, but as unknown even in terms of their probabilities. Nicholas Mangee’s Novelty-Narrative Hypothesis helps us understand how these unknown unknowns drive market outcomes. This book is a treasure trove of information and insights into the radical uncertainty that drives so much of our economic experiences. Economists, policy makers and market participants should take note.

In this important volume, Nicholas Mangee makes a substantial contribution to operationalizing the narrative approach to analyzing fundamental uncertainty as an ongoing feature of the stock market. Uncertainty prevents the definitive measurement of risk which underpins mainstream macro-finance models. But Mangee shows how the incidence of uncertainty, its causes in unforeseen events, and the way in which markets deal with it through narratives, can be analyzed and quantified. The dataset he has built up is a contribution in itself. This is a thoughtful, thoroughly-researched exploration of the narrative approach to embedding fundamental uncertainty in the core of economics and finance. It should be read attentively by theorists, policy-makers and financial practitioners alike.

Attempts to escape from economists’ equilibrium trap have been hampered by their conceit of dividing expectations into ‘rational’ and ‘irrational’. Nicholas Mangee shows, and shows brilliantly, that in the face of inescapable uncertainty, rational decision-making is necessarily built on ‘novelty and narrative’, not mathematical probability.

To say that this book is timely is a massive understatement – current events will be dissected with great interest for the coming decade.

This book develops a highly original approach, called the Novelty-Narrative Hypothesis, to empirical examination of stock market outcomes that would enable economists, policymakers, and market participants to better understand unforeseeable change and Knightian uncertainty. In doing so, Mangee’s book provides a hitherto unavailable set of tools for extracting information on historical events and narrative dynamics, which would be invaluable in academic research and teaching as well as in making practical policy and business decisions.


Macroeconomic Inequality from Reagan to Trump