Who Can Save Us From Jeff Bezos and Silicon Valley’s Planetary Death Wish? 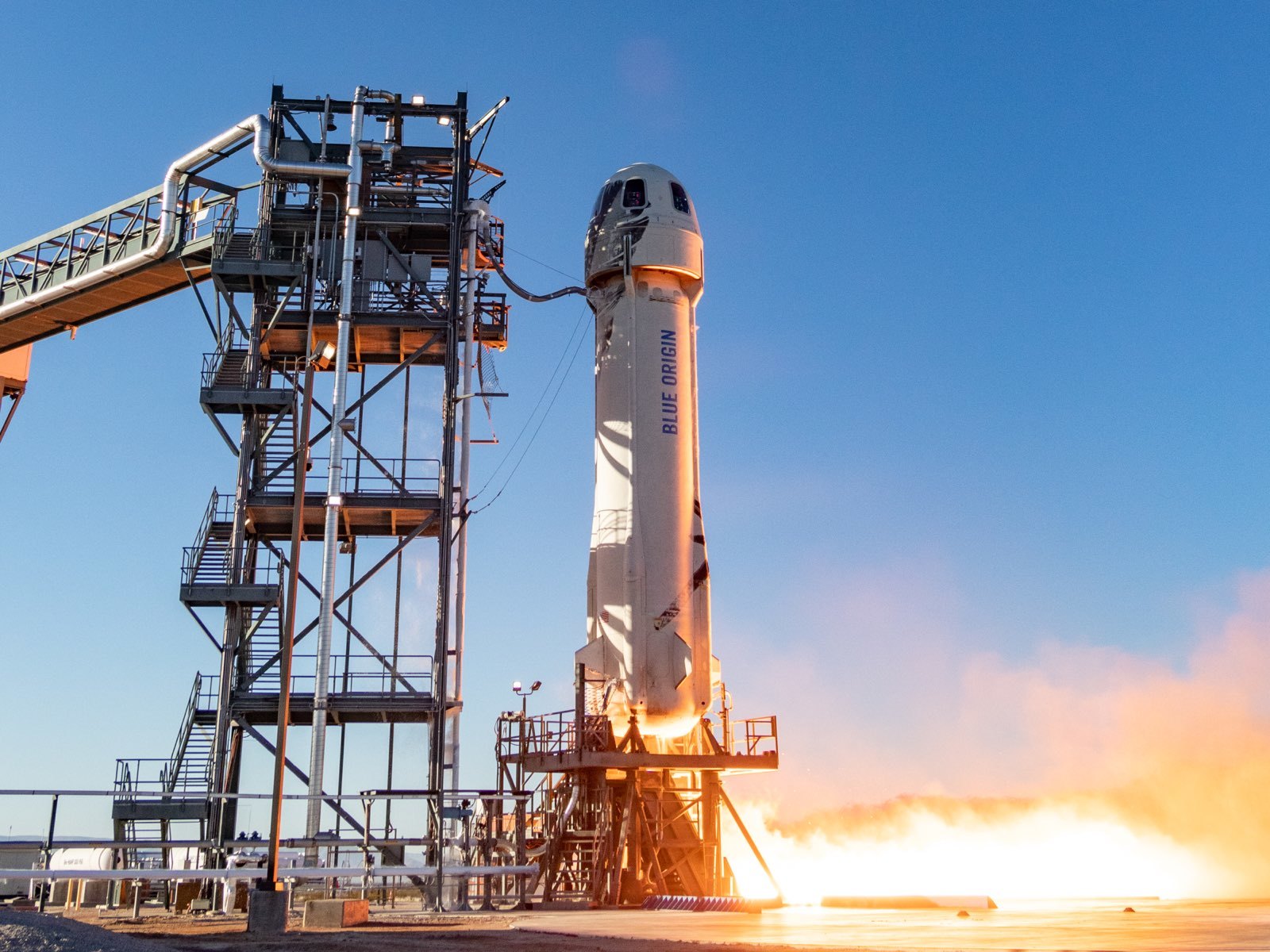 The work of feminist thinkers helps illuminate why billionaires seek to solve problems on Earth by blasting into space.

Midway through 2021, Amazon founder Jeff Bezos, the world’s richest man, realized the first part of his dream to transcend earthly constraints in a thrilling rocket ride to space.

The Federal Aviation Administration noted tartly that he could not claim the title of astronaut, because that term is reserved for persons whose activities in orbit were, among other things, beneficial to public safety. But Bezos has a much bigger vision than that. He wants to be the savior of humankind.

In November 2019, the Atlantic Monthly ran a cover story, “Jeff Bezos’s Master Plan,” featuring an image of the tycoon’s bald head as a glowing planet encircled by a halo of rings, which explains why the billionaire’s recent trip was more than a pricey joyride. The piece outlines Bezos’s conviction that in order to save the planet, humans must leave the Earth behind to colonize outer space. The CEO seeks to realize this plan through his space travel company, Blue Origin. In the future, according to Bezos, humans will escape the ravages of energy depletion and environmental catastrophe by living in meticulously crafted cylindrical space tubes with perfectly controlled climates.

Bezos’s Silicon Valley colleagues vary in their approach to solving earthly problems like climate change and inequality, but there is growing agreement that sticking around is not an option. Fellow tech entrepreneur and space enthusiast Elon Musk, for his part, favors colonizing Mars.

In the fever dreams of Silicon Valley, Planet Earth fades in significance. It becomes little more than a mere jumping-off point to the vast universe beyond where environmental constraints and human foibles need no longer apply. Science and technological advance directed by fantastically wealthy, anti-democratically inclined businessmen will override the limitations of our human nature, and nature itself, once and for all. The final conquest.

If this sounds like a delusion, that’s because it is. But if we are to avoid a march towards a very bleak future, it helps to understand the source of the fantasy. Fortunately, feminist thinkers have been on the case for decades. Their work strongly suggests that before we don our spacesuits, we had better first revise our assumptions and approach to living right here on Earth. Otherwise, we will just carry into space the very same pathologies that threatened our earthly survival in the first place.

Feminists have been exploring the link between human culture and the environmental crisis at least since the 1960s, a time of social and economic upheaval as well as an apocalyptic sense of human-driven threats to survival. By the 1980s, the new field of “ecofeminism” had bloomed, its proponents sharing a central premise that the destruction of the environment and imbalances in human society are not only linked, but mutually reinforcing. Ecofeminists emphasized that a habit of viewing both nature and women as belonging to devalued spheres is a major culprit in environmental crises.

This burst of investigative energy was followed by a severe backlash. Charges – some of them misleading — of essentialism, ethnocentrism, and the recreation of damaging paradigms that many feminists had tried to undo became so pervasive that by 2010, the diverse movement was routinely dismissed. But this wholesale rejection led to the dismissal of much valuable work that could help inform current thinking.

Case in point: Valerie Plumwood’s Feminism and the Mastery of Nature, published in 1993. This illuminating work details how western rationality evolved with a blind spot, namely, a refusal to acknowledge human dependency on nature which was accompanied by a tendency to degrade the position of women.

Plumwood points the finger at Plato, whose metaphor of cosmology outlined a male-female dualism in which rational masculine form (cosmos) rules over irrational feminine matter (chaos). She notes that his Republic emphasized dualism in the Allegory of the Cave, where “nature within” is rejected in favor of a transcendent cultural identity separated from a lower “feminine realm.” The realm of nature that Plato wants to reject is described as “the primal matrix of being, of the woman and the mother, of the body and the senses, of the whole order of physicality and changeability, and finally of the earth itself.”

Plato turns common sense upside down. He suggests that the lifeless, abstract world of forms gives eternal life, but the living, embodied realm of nature is a tomb. Plumwood sees this assumption as leading to a pathological stance in which the rational self can only develop if we deny the value of life, giving preference to values of war, militarism, and means of production dependent on oppression. And the rational self, of course, is a male subject.

In Plumwood’s view, the implications of the Platonic view, extended in the West through Christian rationality, the Enlightenment, and the rise of capitalism, are both profound and disastrous. Our human identity becomes alienated from nature as we increasingly view ourselves as the external controllers of the natural world. In this scheme, everything and everyone associated with nature loses intrinsic value and becomes the instrument for the master subject’s existence. Ecological factors are reduced to “externalities,” and little account is taken of natural limitations.

It doesn’t take much to see how the assumptions Plumwood describes inform the visions of Silicon Valley elites, who, in addition to their quest to ascend to the heavens, also seek to extend human life indefinitely or, in the words of Google founders Sergey Brin and Larry Page, “solve death.”[1] Their view of the human future is a spaceship blasting off from decaying earthly existence – a movement towards a total break with nature.

Bezos’s space tube is haunted by fear — the human dread of death coupled with a deep anxiety about a universe in which humans do not have ultimate control. This fear launches with a finger on the self-destruct button, ending either with the death of the other on whom the master subject relies or with the abandonment of mastery and failure to adapt in life-affirming ways.

So here we are, with economies and political systems increasingly driven by reckless, greedy man-children who would rather play at being captain of the Starship Enterprise than tackle earthly problems, starting with their own transformation.

The work of feminist psychologist Dorothy Dinnerstein helps explain another way in which our western assumptions and approach to life lead us astray. Her 1976 book, The Mermaid and the Minotaur, takes dualism by the horns, arguing that seemingly “natural” gender arrangements have not only been damaging to human potential but greatly destructive to the environment. Dinnerstein goes back to the earliest human past and looks at the evolutionary and biological background of human social development.

Dinnerstein traces the dualistic pattern of male-as-transcendent and the female-as-nurturer to models of childrearing in which the care of infants and early childcare is relegated primarily to females. This model, she points out, has its origins in the human evolutionary-biological situation, as it is the mother who gets pregnant and breastfeeds the helpless infant. But patriarchal cultures make gender arrangements determinative where they should not be. Dinnerstein argues that patriarchies leverage aspects of human evolution and biology—now rendered far less determinative by developments like birth control and reduced infant mortality—to designate women as primary caregivers and secondary human beings.

What we end up with is a foundation for patriarchy that disconnects males from processes of caregiving and nurturing, leading not only to a variety of social problems but a hostile stance toward all things classed as feminine — and to nature itself. Patriarchal cultures breed adults who will revenge themselves on the mother for her early omnipotence and act out upon her surrogate, nature, in increasingly technically proficient expressions of infantile aggression.

Dinnerstein’s warnings play out in trends of privatization and renewed calls for traditional family values which reinstate ancient sexual arrangements and reproduce what is best for the western male subject—i.e. the affluent white man—through deregulated markets and hierarchies of power that exclude and subordinate women and non-whites.

The view that pathologies become inscribed into human culture when males do not fully embody nurturing roles helps explain why, despite multiple waves of feminism, gendered household labor remains unpaid, and market activities like childcare and home health care are disproportionately shouldered by women, nonwhites, and immigrants. The role of the family within the American neoliberal context is constructed to reaffirm unhealthy patriarchal family norms.

Meanwhile, the full participation of women in all aspects of society has not been achieved. Despite the fact that families rely on the income of both parents and require their caregiving investments, American workplaces remain hostile to parental leave in general, and paternal childcare in particular. Men are still commonly considered less naturally equipped to care for young children, even though the rise of stay-at-home dads, who have doubled in number since 1989, proves that men have plenty of caregiving capacity and many feel fulfillment and pride in using it.

Dinnerstein’s work suggests that a child born to see humans of all genders robustly participating in its development has the potential to grow into an adult more sensitive to the conditions under which we exist on the earth, better able to recognize and accommodate denied relationships of dependency and mutuality, and more likely to acknowledge our debt to others. It underscores that modifying sexual arrangements is necessary for creating an egalitarian culture beyond dualism and to finding a mutual, ethical basis for an enriching coexistence with others — and with the Earth itself.

Plumwood and Dinnerstein’s inquiries into the illusions of mastery reveal the conditions that keep us from mastering ourselves and allow us to become seduced by fantasies of escape from reality that may actually hasten our demise. And they help explain why legal, institutional, economic barriers –and especially mental and psychological barriers — are so difficult to surmount.

The good news is that humans are the only creatures we know of that can actually guide our own evolution. If confronted, our mindsets and our social arrangements are mutable. The western subject could potentially embark on a long-overdue homecoming to Earth.