Where the SPD and Germany would stand today without Agenda 2010 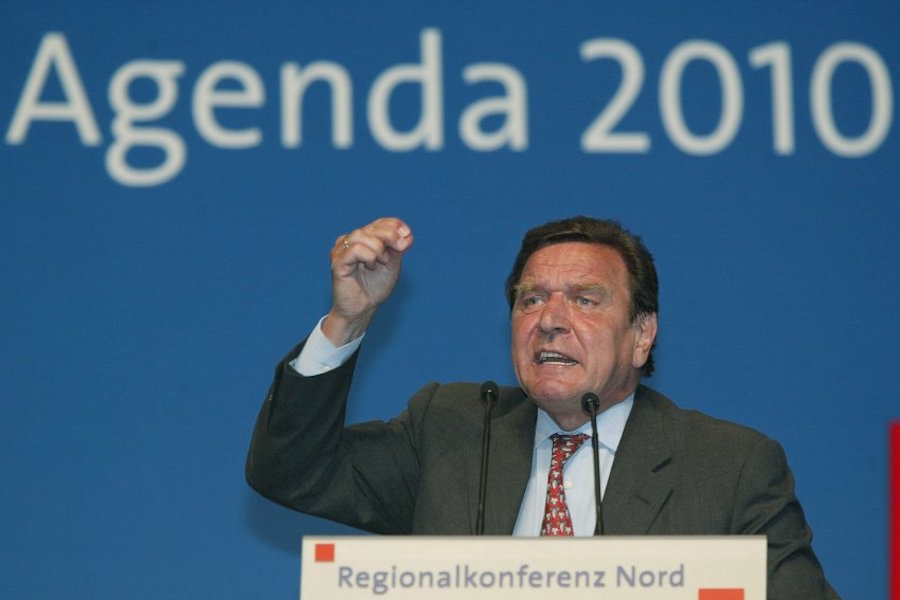 The SPD, the Social Democratic Party of Germany, has been collapsing in the popularity polls ever since they in 2003 launched the reform Agenda. What would have come of the party if it had not been for this insane rush to reform? Possibly Gerhard Schroeder could even still be chancellor today. A case for the time machine.

In the cult film Run Lola Run the red-haired protagonist first loses her life before she is given the chance to turn back the clock, to start afresh and then, after three attempts, end up happily in her lover’s arms. What if the SPD were given such a chance? In this case, time would have to be turned back a full 15 years or so, back to the time before the launch of Agenda 2010. Back to the time before the onset of SPD’s collapse. Coincidence or not. Who knows whether without the Agenda the party might just be in excellent shape today.

Sounds crazy at first, doesn’t it? Wouldn’t Germany still be in a deep crisis without the Agenda? Perhaps. Whereby…We don’t know for sure.

Let’s just assume that on March 14, 2003 on his way to the office Gerhard Schroeder lost his briefcase - and with it the Agenda speech he was about to deliver. An impromptu speech had to be held on, let’s say, the global challenges of animal protection. Yes, and a few years earlier he did not take on this restructurer role along with the Brit Tony Blair.

Bad scenario? Well, not necessarily. Germany would, of course, also not have come up with a practice fee ( for ambulant medical care), as part of the Agenda, which led nowhere and had to be repealed a few years later. No Riester pension scheme, counting on capital markets, would have been introduced in Germany even as far back as in 2001 and today we could spare ourselves debates about possibly ditching it for its lack of success. Without the zealous drive for reform back then and without the spirit of the Agenda we would still have a traditional thirteen years of schooling to prepare students for university instead of now only twelve years. Already, for lack of recognizable benefits some states in Germany have gone back to the old system.

The title Master Craftsman would still be contingent upon earning a Master Craftsman’s diploma. Pensions would still be paid out at the beginning instead of at the end of the month (in all seriousness, at that time of austerity panics this decision was made to relieve the pension funds). We might still have a home-owners allowance scheme and thus wouldn’t be in need of housing programs. On the other hand, there would be, an awful thought, no hedge funds in Germany. These had still been permitted in the liberalization fervor of 2003 only to undergo regulation measures right after the financial crisis. Oh, and there would also be no withholding tax, which by now our minister of finance wants to abolish again for lack of valid reasons. Another one of those reform nonstarters.

And what about the labor market reform? Isn’t it true that the shortened allowed period for collecting unemployment benefits put pressure on all those who (allegedly) don’t feel like working? Hmmm. At any rate, in Germany the proportion of the unemployed (44 percent) who are out of work beyond a year’s time is still higher compared to average numbers in the OECD countries (35 percent). Higher even than in France. And almost twice as high as in the US. Once a person has dropped out of the labor market or lacks skills, cutting the unemployment benefits won’t help either.

Perhaps there’s benefit in wage restraints which have so enhanced our competitiveness. Maybe. It’s just that the Agenda played only a limited role in this matter. Trade unionists and employers had been on a course of moderation since the mid-nineties and by 2003 salary cuts had already been so extensive that they more than made up for those excessively high salaries of the unification boom. German exports began to boom in 2003, at a time when one couldn’t even know yet whether Schroeder’s extensive reforms would be realized or not.

This does, of course, not imply that the Agenda was completely for naught. Certainly, quite a few companies were able to maintain jobs because, for instance, hiring people on a temporary basis became easier for them or because non-wage labor costs would decline rather than rise. Yet such advantages were at least in big parts offset by many disadvantages and absurdities. This was especially true for the Social Democrats .

If we now embark the time machine and travel back to the year 2003 (Ready to go?), we might witness that existentially the fate of the Social Democrats takes a different course – much as in Run Lola Run. In a fresh start Schroeder focuses on animal protection (and in moderate doses tackles reforms that really make sense). Then, starting in 2004, Germany experiences an export boom. If only due to the large number of medium-sized businesses that in the past had always been offering those machines, plants and cars for which now, in the carefree boom of the noughties, there suddenly is demand, in countries from America to China – Agenda or no Agenda. In fact, without the Agenda, the rest of the German (domestic) economy is pulled along even faster by the booming sectors – the reason being that in many cases the government waives practice fees, private co-payments and cuts, and the Germans in turn spend more money.

Without all those shaky jobs then a record low-wage sector will not materialize and consequently there is also no need for a minimum wage (introduced in 2015). What’s more, since Germans purchase and import more goods, the other countries don’t go into greater debt.

And suddenly large numbers of voters don’t turn their backs on the Social Democrats. You see, they are glad that new cuts are not pushed onto those who have no money to begin with. Those who wouldn’t comprehend why economic growth has to be achieved by letting people slide down to the poverty line after just one year of unemployment, even those who have dutifully paid their contributions for decades, and why only the rich get increasingly richer.

Then there are not five million unemployed in Germany so that Gerd doesn’t have to hold new elections in 2005. With rapidly declining unemployment rates the man is re-elected automatically. Chances are good that in 2016 he is still in office to replace Helmut Kohl and even Konrad Adenauer as the republic’s longest-serving chancellor. And that Joschka will soon become Germany’s longest-serving Foreign Secretary. Red-Green paradise. Cool, isn’t it?

Wake up! It’s only a movie.