Top incomes and the glass ceiling

The existence of a glass ceiling is typically discussed in terms of earnings (see for example Cotter et al. 2001, Albrecht et al. 2003, and Arulampalam et al. 2007), referring loosely to either the fact that women, on average, earn less than men or, more specifically, to the fact that women are under-represented at the top of the pay distribution. Here, we are concerned with under-representation at the top, but we would like to shift the focus from earnings to income. We consider the glass ceiling in terms of total incomes, where this includes self-employment income in addition to wages and salaries, and capital income as well as earned income. At the top of the income distribution, these sources of income are important and they may change the picture. Equal pay and laws banning discrimination in employment do not apply to the self-employed, where women may also be disadvantaged. Historically, women have owned a significant fraction of total wealth and hence have received a significant share of capital income. Have the gains by women in terms of earnings, such as the declining gender gap over recent decades in many OECD countries, been offset – or re-enforced – by what has happened to capital income?

The gender dimension has received little attention in the recent literature on top incomes (Alvaredo et al. 2013). A rare exception is the recent release by Statistics Canada (2013), which reports that the proportion of women in the top 1% in Canada has risen from 11% in 1982 to 21% in 2010. There has been, in this sense, a clear move towards equality, but we are still a long way short of parity. That there is little with which to compare the Canadian statistics reflects the fact that the personal income tax in the US and France – two of the countries most studied – is levied on the joint income of couples, so that individual incomes are not recorded in the tax data. However, a number of countries, just like Canada, apply individual income taxation. Such a country is the UK, for which we present results below. In our current research project we are also assembling figures for Australia, Canada, Denmark, New Zealand, and Norway.

Evidence from the UK

The gender composition of top income groups in the UK from 1997 to 2011 is shown in Figure 1 (the data are drawn from published tabulations of the Survey of Personal Incomes – see Atkinson 2007). In each case, the income groups are defined as percentages of the total population aged 15 and over, and relate to total gross income. There are two immediate conclusions to be drawn from Figure 1.

If there has been an improvement in the relative position of women at the lower, but not the higher, ranges of top incomes, is this evidence of a ‘glass ceiling’? How can such an effect be measured? If, as is often assumed, the upper tail of the distribution can be represented by a Pareto distribution, then this provides one possible measure. 1 The inverse of the Pareto ‘shape’ parameter, 1/α, shows how much incomes rise as one moves up to the top of the distribution. In words, 1/α is the slope of the (log) income parade.

The difference between the value of (1/α) for women compared to men provides an indicator of the extent of a glass ceiling. If (1/α) is smaller for women, this means that earnings rise less steeply for them. As (1/α) approaches zero, there literally is a ceiling. This is the natural counterpart of the approach adopted in the literature on earnings (such as Figure 1 in Albrecht et al. 2003). In fact, as is illustrated in Figure 2 for the UK in 2011, the value of (1/α) is indeed lower for women – 0.45, compared with 0.56 for men (corresponding to values of 2.19 and 1.80 for α). (The curve is fitted over the range from £50,000 upwards, which is approximately the top 5 % of the overall income distribution.)

The corresponding figures of (1/α) for 1999 are 0.42 for women and 0.52 for men, suggesting that both lines have become steeper over time (α has fallen). In this sense, earnings dispersion has increased for both men and women. But there has been little change in the gap between them. If the glass ceiling effect had become less, then (1/α) for women would have risen faster.

The difference between male and female values of (1/α) provides one simple summary statistic to make comparisons over time and across countries. But we need to go further in considering what is meant by a glass ceiling. As may be observed from Figure 2, the Pareto straight line does not provide a fully satisfactory fit to the upper tail of the income distribution in the UK, especially for women, and a richer description of the upper tail is necessary. One avenue to explore, as incomes rise, is the different contribution of various sources – investment income, self-employment income, and earnings income (with which we began) – each of which has a different gender dimension.

The glass ceiling needs to be examined in relation not only to the distribution of earnings, but also to the distribution of total incomes, bringing self-employment income and capital income into the picture. In countries with independent taxation of couples, it is possible to investigate the proportion of women in the top income groups. In Canada and the UK, the evidence shows that we are presently a long way from parity. The proportion of women in the top 1% is rising, but progress is slower, or non-existent, at the very top of the distribution. Put another way, the slope of the income parade for women remains less than that for men. In the project being carried out as part of INET at the Oxford Martin School, we aim to see how far these conclusions carry over to other countries, to examine the long-run evolution of gender differences at the top of the distribution, and the role of different income sources.

Arulampalam, W, A L Booth and M L Bryan (2007), “Is there a glass ceiling over Europe? Exploring the gender pay gap across the wage distribution”, Industrial and Labor Relations Review, vol 60: 163-186.

Atkinson, A B (2007), “The distribution of top incomes in the United Kingdom 1908-2000”, in A B Atkinson and T Piketty, (eds.), Top incomes over the twentieth century, Oxford University Press, Oxford. 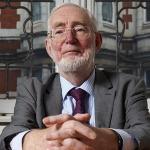