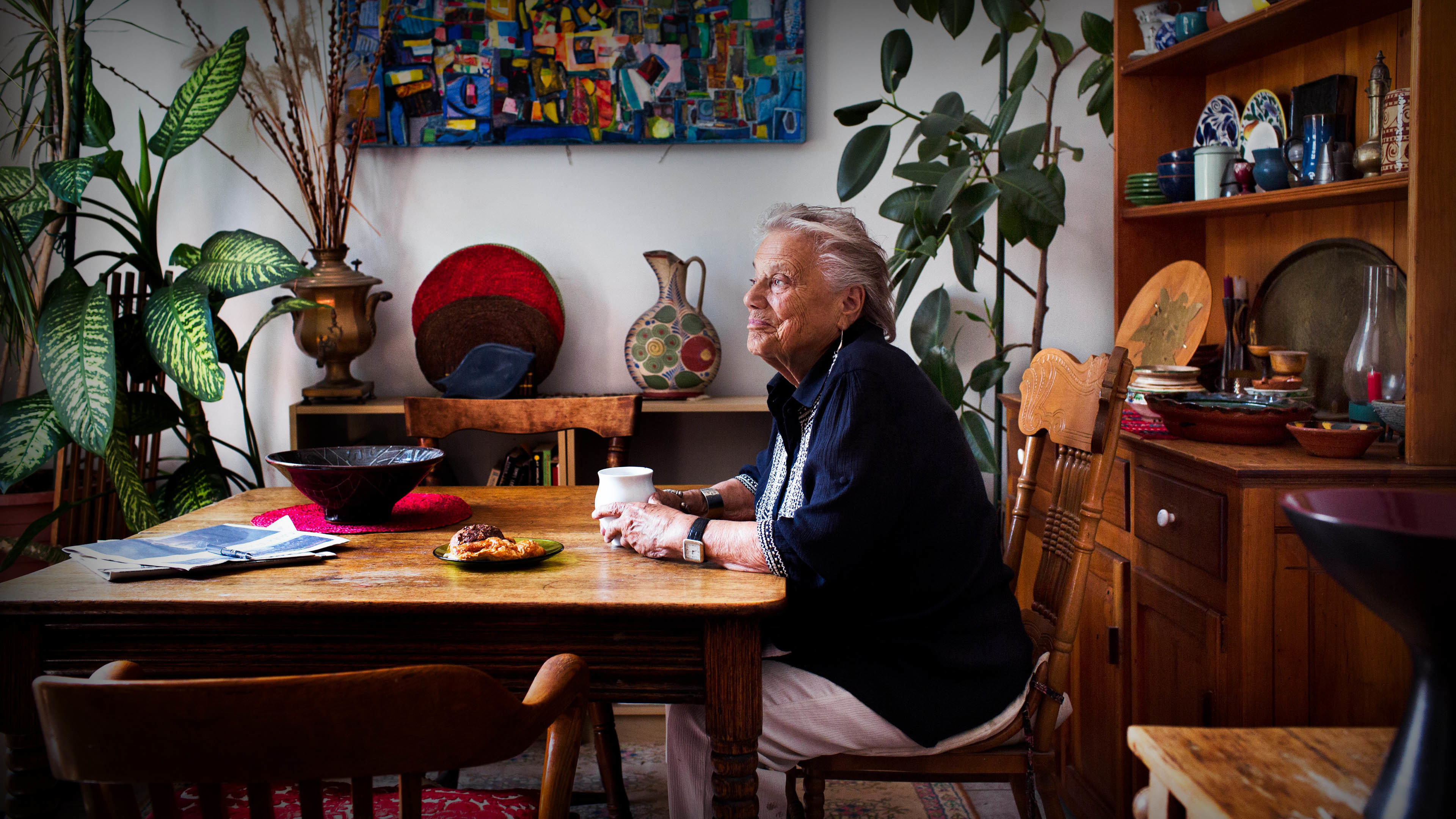 Some Personal Reflections on a Half Century of Friendship and Appreciation

On this truly special occasion of the release of five video clips derived from a full interview of Kari Polanyi Levitt conducted in July 2019, I am most grateful to INET for having invited me to comment on Kari’s lifetime work that she undertook with such passion, consistency and conviction from a very young age and until today. Despite some most recent personal health setbacks, her resilience and courage is most inspiring, as she continues to find freedom and excitement in her intellectual universe, grounded in the real world, which guides her thinking to this day.

Professor Kari Polanyi Levitt had the good fortune of being born to two towering Hungarian intellectual figures of the twentieth century: Karl Polanyi and Ilona Duczynska. During her lifetime of almost a century, fate brought Kari from her beloved city of birth, the Red Vienna of the 1920s, to England in the 1930s and eventually studying at the London School of Economics (LSE) during the Second World War. As Kari explained to me, this was at a time when LSE students were transferred for safety to the wartime campus of Cambridge University and where mainly foreign intellectuals (including Nicholas Kaldor and F.A. Hayek) assured teaching, as well as “colonials” (such as W.A. Lewis), because of civilian conscription of British academics, such as Lionel Robbins. Having completed her undergraduate degree in economics and statistics, in 1947 she came to Canada to join and subsequently marry in 1950 Joe Levitt, who had been a Canadian soldier posted during the war in Europe and who himself eventually became a distinguished Canadian historian and academic at the University of Ottawa. After doing factory work and working for trade unions, in 1959 she completed a Master’s degree in economics at the University of Toronto, and, two years later, began teaching economics at McGill University in Montreal.

It is during her tenth year of university teaching at McGill University, when she had already defined her primary areas of research endeavor, that I first encountered Kari. This was in the Fall of 1971, when I was just starting my third-year of undergraduate studies at McGill, and was registered for a two-semester undergraduate course in the history of economic thought. Because of a problem with the official instructor who had decided unexpectedly and abruptly to withdraw from university teaching because of his advanced age, Kari was asked, together with another half-dozen departmental teaching staff members, to fill in and share the teaching of this compulsory honors undergraduate course. It must have been quite a burden in having been suddenly thrusted into teaching part of a new course for her. However, I remember how she managed so well. In particular, I recall vividly how she analyzed, for example, the eighteenth-century works of François Quesnay of the French Physiocratic School and how she impressed students because of her technical knowledge of inter-industry input-output analysis in interpreting the various historical versions of Quesnay’s Tableau économique.

In fact, I had so much enjoyed her teaching that I decided to take another course with her in January-April of 1972. This was a third-year-level elective course, which went under the unconventional title, if I remember well: The Political Economy of Dependency in the Western Hemisphere. Kari had put together a completely novel course at the time, which nowadays would perhaps go under the general rubric of globalization and international development, but which, at the time, was completely new as a distinct field of university teaching in Canada. This course covered many of the areas that were the primary domain of her research inquiry in the early 1970s. Her teaching material included dependency theory in terms of Prebischian core-periphery framework, but which remained grounded on some earlier staples theory approach found in the works of Harold Innis, which had become popular among numerous Canadian social scientists during the early postwar period. This broad interdisciplinary approach that was blossoming intellectually into a Canadian political economy of dependency during that era included such Innisian economists like Mel Watkins, and at the same time this hemispheric view of dependency also connected well with some of Kari’s earlier work on plantation economies in the Caribbean region. Perhaps, even more so, it tied in well with her intricate study of the role of transnational corporations, which, through foreign direct investment flows, controlled and shaped the economic structures of disparate regions of both the developing and industrialized world, including Canada. She had already spelled this out in her most celebrated book, Silent Surrender: The Multinational Corporation in Canada that had been first published in 1970 and that formed the content of some of those undergraduate classes.

This complex dynamic intertwining of neo-mercantilist relations, linking natural resource extraction, capital flows and even international migration, introduced me to a worldview that remains a structured backbone to my thoughts even today. Indeed, I became so interested and enthusiastic about the material we were studying that, when I chose to write a term paper for the course in the area of international migration and development, I ended up writing a document of over 100 pages that I subsequently published over a decade later based on my original undergraduate research effort in 1972!

When I subsequently entered the Master’s and PhD programs, I also took courses in the field of economic development with her. However, by the late 1970s, I had discovered new passions/interests and, then as I began teaching at the University of Ottawa, I had steered into a different research path primarily in the areas of Post-Keynesian macroeconomics and monetary economics, which just did not overlap well with Kari’s interests during that era. It is true that we did meet occasionally; but there was a long hiatus of approximately three decades, during which we had parted into separate research directions.

As one can infer from the video interview, the work of Kari Polanyi Levitt has followed many diverse research paths over the years. However, there are at least three major research poles in her lifelong work that merit highlighting in this context. The first two poles: (1) development theory and north-south relations, and (2) foreign investment and multinational corporations, were areas that overlap with when I first had contact with her in the early 1970s. However, there is a third area of research that coincided with the passing of Kari’s mother and which also partly overlaps with when I began teaching at the University of Ottawa in 1978. This third research pole has to do with Kari’s “discovery” of Karl Polanyi. Of course, Kari knew very well her father’s work, but she had never really taken his writings to heart until she became custodian of Karl Polanyi’s intellectual legacy after her mother’s passing in 1978. She, together with the support of another graduate student of my generation, Marguerite Mendell, worked relentlessly throughout the 1980s in organizing international conferences on the work of Karl Polanyi and, by the late 1980s, their efforts led to the founding of the Karl Polanyi Institute of Political Economy, located at Concordia University in Montreal.

I knew and followed, of course, what Kari had been researching over those many years. However, it was only in 2008, when appointed member of the selection committee of the Progressive Economics Forum in Canada, which awarded the first John Kenneth Galbraith Prize jointly to Kari Polanyi Levitt and Mel Watkins, that I found myself moving back once again onto a somewhat common intellectual path. Inspired by what she stated and wrote when awarded the prize, we both reconnected because of my own re-discovery of the relevance of Karl Polanyi’s work over the last decade. Kari analyzed how neoliberal transformations had moved twenty-first century capitalism to embrace rampant financialization with its devastating consequences on the world economy, especially as the latter was the proximate cause of the global financial crisis of 2008. Indeed, among other things, a few years later, I participated in the twelfth International Karl Polanyi Conference in Buenos Aires and presented a paper on Karl Polanyi’s views on money that analyzed how the latter could shed light on the crisis of the eurozone in 2012. That paper, written jointly with my colleague Eugenia Correa from UNAM in Mexico City, was even awarded a special prize from the Association for Social Economics in 2017. However, throughout most of the last decade, I have been influenced by the work of Karl Polanyi in numerous ways that has led to a truly productive interaction with Kari. For instance, we produced a special issue in 2013 of the International Journal of Political Economy on Polanyi’s relevance for the twenty-first century in which Kari contributed a special piece on Polanyi vis-à-vis Keynes and Hayek. We even participated in a special INET online symposium in 2016 on interpreting neoliberalism within a Polanyian perspective inspired from Karl Polanyi’s The Great Transformation, of which a longer revised version was eventually published in Spanish in 2018 in the online open access journal Ola Financiera.

There have been just too many collaborations over the last decade to list here. However, what has led to this productive interaction has been our shared vision of how neoliberalism has promoted a disruptive form of globalization that has led to gross inequalities of income and wealth, as well as the loss of economic sovereignty and democracy. Much as during the dark era of the 1930s, which Karl Polanyi had analyzed in the Great Transformation, the crisis of neoliberalism and globalization can recreate new nationalistic creatures from the swamps, as we have seen slowly appearing both in the core industrial world and in developing countries. As Kari has so eloquently stated it towards the end of the interview, in order to defend democracy and to prevent this pernicious form of nationalism, global capitalism needs taming and countries must reclaim policy autonomy and sovereignty over their resources and entrench citizens’ rights for jobs and income. Countries must reclaim their right to an economic development based on principles of sovereignty, democracy and reasonable growth that is more equitable and that will not lead to ecological catastrophe. That is Kari’s central message and appeal to humanity.