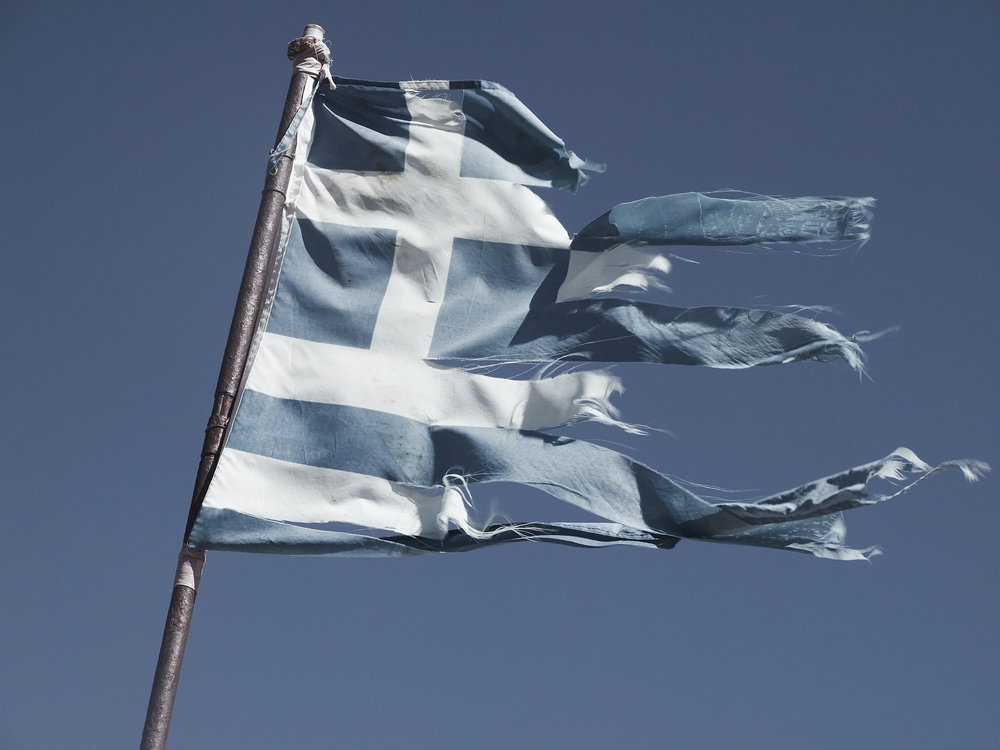 The latest austerity deal is terrible for Greece and Europe.

Bad economic ideas inflict untold human suffering. When they come cloaked in a fog of Orwellian obfuscation, their poison and effects can spread with little hindrance. The public is misled. Power plays are hidden from view.

In Greece, where suicide rates have risen sharply in the wake of austerity measures, people lose hope.

Joseph Stiglitz, who has been following the Greek crisis closely and is recently returned from Athens, sets himself to the task of cutting through the fog. His plain English and fearless use of moral language to expose the ugliness behind economic and political abstractions lend clarity to a situation that is not just bringing a nation to its knees, but threatening to destroy the European project and bring on a future of conflict and hardship.

In discussing Greece’s Third Memorandum of Understanding (MoU) and its draconian terms, Stiglitz observes that the MoU is really a “surrender document” that eclipses the country’s economic sovereignty and ensures that Greece’s depression — already deeper than America’s Great Depression — will get worse. An economy that is seeing youth unemployment reaching up to 60 percent is likely to lose another 5 percent in GDP. That is over and beyond the 25 percent plunge in GDP the country has been hit with since the imposition of austerity measures.

Socially conservative Germans, Stiglitz warns, are doubling down on the discredited notion that austerity policies help economies recover in times of crisis. In reality, the insistence on keeping wages down, stripping away bargaining power from workers, forcing small business owners to pay taxes a year in advance, and cutting pensions will only hamper demand and lead to a deepening spiral of debt. (Stiglitz emphasizes that hardly any of the money loaned to Greece has actually gone to help the Greeks themselves, but rather private-sector creditors – namely German and French banks).

Reflecting on a recent panel at Columbia University with Finance Minister Wolfgang Schäuble followed by a dinner, Stiglitz said, “My heart goes out to Greece, even more so after meeting Schäuble.”

Among the puzzling aspects of the MoU are demands for reforms on things seemingly trivial as milk. While pensioners are eating out of garbage cans, the troika has been haggling over how old a carton of milk can be if it is to be labeled “fresh.” Stiglitz observes that if you look closely you see that special interests — in this case the big dairy companies of Holland — appear to be behind the reforms. Dutch milk sellers would prefer that their milk, which travels long distances to reach Greece, be allowed to call itself fresh — a move that will only hurt local dairies. By discouraging local production, the MoU paves the way for even more Greek unemployment and less demand for goods and services — hardly a recipe for economic health. (The chairman of the Eurogroup , it may be worth noting, is Jeroen Dijsselbloem, the Dutch Finance minister).

In Stiglitz’s view, what’s behind the ill-advised economic schemes is a power struggle in which Germany and its supporters seek to undermine the Greek economy in order to push out a government (Syriza) they do not like. In doing so they are tearing apart families, snuffing out the hopes of young people, and delivering a kind of humiliation and suffering to a country that history shows does not turn out well for anyone.

Stiglitz reminded the audience that John Maynard Keynes once issued warnings about the Treaty of Versailles, the peace settlement signed at the end of World War I, which ordered Germany to pay massive reparations. Inflicting more pain on a weakened economy would send an already-battered nation into depression. Keynes turned out to be correct: resentment of the harsh terms and the resulting high unemployment led to the rise of Adolf Hitler. Far from restoring stability in Europe, the Treaty set the stage for an unprecedented disaster and unspeakable human misery.

had not learned the lesson of its own history. Officials are blind to the reality that debt forgiveness is necessary for Greece at a time when nearly everyone, including the International Monetary Fund (IMF), recognizes that the country simply can’t pay back what it owes. Instead of remembering the terrible consequences of mass unemployment following WWI, many Germans insist that it was hyperinflation that led to Hitler, and so they tend to support central bank policies that guard against that problem rather than the far more worrisome specter of joblessness.

As Stiglitz describes, the result of all this historical amnesia and economic blindness is a “Dickensian” nightmare that recalls 19 th century debtor’s prisons where people were punished for the inability to pay debts and locked (literally) into a situation in which paying them was, of course, impossible. Only now, the prisoner is an entire country.

Stiglitz notes the fundamental problem that eurozone leaders will not let individual countries like Greece, Portugal or Spain change economic policies, no matter how harmful they become. Extreme right-wing elements will benefit as trust in government diminishes. As Stiglitz sees it, flaws in the design of the euro, as well as flaws in the design of the European Central Bank, which is not equipped to address unemployment, hurt Europe’s prospects and yet are extremely difficult to address because they are embedded in treaties that require the unanimous agreement of member countries to alter. He pointed out that if you look at countries like Sweden, it appears that those that did not join the eurozone seem to be in better shape than those that joined. The eurozone has been stuck in persistent stagnation, whereas Sweden’s economy, for example, is brightening.

When an audience member asked whether forgiving Greek debt would lead to moral hazard — encouraging other countries to borrow beyond their means — Stiglitz responded that it was unimaginable that any country would want to go through what the Greeks are currently enduring. He noted that the lenders bear even more responsibility for the current mess than the borrowers. Goldman Sachs, for example, structured irresponsible deals that allowed the Greek government at the time of the Maastricht Treaty to hide its debt. Stiglitz concluded that if anything, moral hazard is a problem on the lender side, as there is little to discourage lending money to countries that are unlikely to be able to pay back. He also noted that the idea of the Greek government selling assets in the middle of a depression to pay back debt was a bad idea, because prices are so low that this amounts to little more than a fire sale.

A major global problem, Stiglitz observed, is a lack of bankruptcy laws that apply to countries — no legal framework for putting them on a sustainable path. This situation has enabled big, powerful countries like the United States and Germany to bully smaller countries into accepting economic policies that may be detrimental to their societies.

The real deficit in Europe, said Stiglitz, is a “democratic deficit.”

Is there any hope for Greece? Stiglitz did not offer any rosy scenarios, pointing out that saving Greece from ruin will not only require debt restructuring but compromises on the insistence that the county run a primary budget surplus — a policy that causes weak demand because income that is coming in is not being spent in the economy. As awful as the prospect of leaving the eurozone may be for Greece, staying in given the current terms only means a longer and deeper depression. The best way forward might be moving toward a two currency situation, using both the euro and a “Greek euro” — a currency that would be tradable within the country’s own banking system. At least then Greece would be better able to set its course for the future. A tiny spark of hope is better than no hope at all.