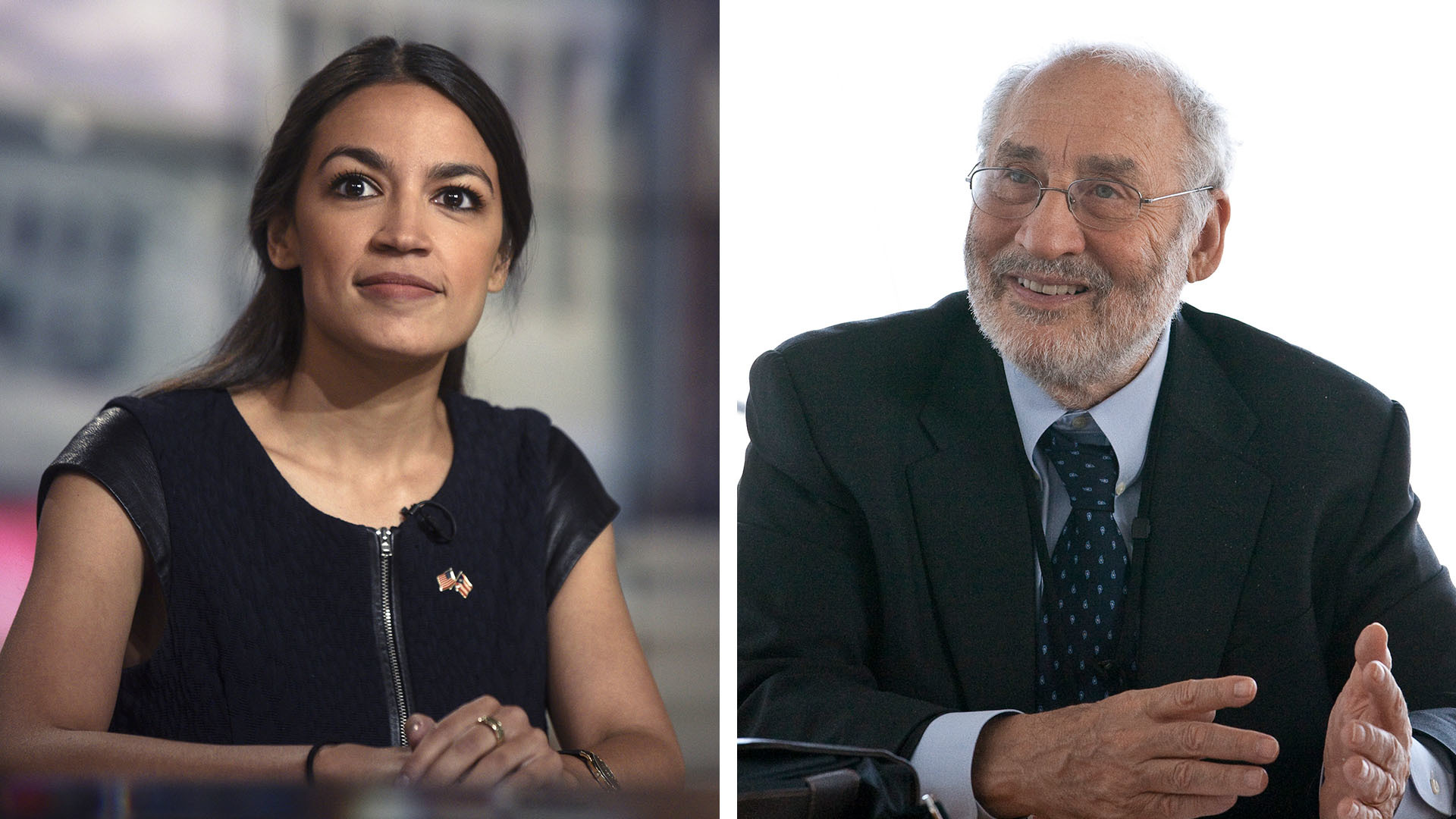 The 28-year-old Ocasio-Cortez, a democratic socialist, recently sent shock waves through the Democratic Party when she snatched a primary victory from powerful incumbent Joe Crowley. Stiglitz, a Nobel Prize-winner and author of several books, including The Price of Inequality, has been sharply critical of policies that exacerbate the divide between the rich and the rest.

Ocasio-Cortez spoke of the frustration she had witnessed of working class Americans sliding into poverty. She criticized the Democratic Party for not being more responsive to the problem of economic inequality and observed that many “reluctant” Trump voters shared anger with her supporters over the country’s economic divide.

“There’s consensus that the rich are getting richer and poor are getting poorer,” she said. The candidate noted that the party and the people have been parting ways too often, observing, for example, that 70% of all Americans and 84% of Democrats currently support an improved and expanded Medicare for all.

“So why aren’t 84% of Democratic members of Congress cosponsoring this legislation right now?” asked Ocasio-Cortez. She also called upon the party to develop “a more comprehensive and intersectional argument for working people.”

Among the topics discussed were climate change and fate of Puerto Rico, which suffered devastation from Hurricane Maria in 2017. The candidate blasted politicians and financiers whom she said were trying to drive Puerto Ricans away so that they could turn the island into a resort, adding that what was needed instead was a “new Marshall Plan for Puerto Rico” and a future-based program of 100% renewable energy (See Martin Guzman: “Puerto Rico is Getting Squeezed).”

The issue of racism threaded many of the evening’s discussions. Ocasio-Cortez accused President Trump of opening racial wounds in order to distract from “runaway income inequality.” During an exchange on Mexico, the candidate said that Trump had opened “Pandora’s Box” of racial tension. When Stiglitz asked for her view of the North American Free Trade Agreement (NAFTA), she did not mince words.

“We know that NAFTA really set up the slide of the Democratic Party for thirty years,” she said, faulting the policy for creating environmental imbalances and exacerbating economic inequality. “Gains of trade should be enjoyed by all workers who helped create those gains,” she insisted.

Both Stiglitz and Ocasio-Cortez emphasized that issues of race, the economy, and the environment were intertwined. The candidate cited Hurricane Katrina, which battered New Orleans in 2005, as “disaster capitalism at its finest.” She decried a situation in which a city was allowed to be ravaged by a storm, neglected in recovery, and its people left worse off than they were before. She criticized the Federal Emergency Management Agency (FEMA) for focusing on rebuilding what was there before the storm instead of looking for sustainable solutions and a “just transition” that focused on people’s needs and updating infrastructure.

On racial and economic justice, Stiglitz added, “Martin Luther King put it very strongly that those two are really two sides of the same coin.”

Schiffrin observed that programs like Medicare for all and free college tuition would not be possible in a world in which companies refuse to pay taxes. Stiglitz added that the Republicans’ 2017 tax bill, when fully implemented, would raise taxes on the majority of people in the middle class “to finance a tax cut for the corporations and the billionaires.” He said that the same people who resisted a stimulus in 2009-10, citing fears of the deficit, were now fine with adding trillions to the deficit to finance a tax cut for the rich.

Ocasio-Cortez, calling the tax bill a “wealth transfer” from working people to the very rich, asked why it is that this type of transfer was “business as usual” when any wealth transfer in the reverse would be deemed inconceivable.

Stiglitz touched upon the problem of student debt, noting that it has ballooned to one-and-a-half trillion dollars. “What’s striking over the last five to ten years,” he said, “is that there has been almost no new lending. It’s mostly just compound interest” on the debt that had already accumulated. Ocasio-Cortez expressed outrage that “an entire generation was delaying the milestones of getting a house, getting married, or buying a car” and that student debt was having “a profound dragging effect on economic activity.”

Stiglitz emphasized that other countries with fewer resources were able to give young people greater access to education, noting such investment was a matter of choice.  “It’s not that we can’t afford it,” he said. “We’ve been making some very bad choices which are putting into jeopardy our future economy and the wellbeing of large portions of our country.”

When asked about what she could do in Congress to address the problems discussed, Ocasio-Cortez observed that much depended on the outcome of the midterm elections and the future composition of the House and Senate. But solutions, she noted, had to come from the “mass mobilization of organizing.” Women in Congress, she noted, were not leading the MeToo movement, but rather acting as part of it in response to the mobilization and protesting of constituents. That is why people needed to stay, as she put it, “loud and active.”

Stiglitz pointed out that the types of candidates both parties were supporting in the midterms would set the stage for 2020. Ocasio-Cortez agreed, noting the importance of Democrats having messages that energize people and drive them to organize, much as Republicans had learned to do. “We need to be unafraid to take strong moral stances,” she said.

“If we don’t find a way to win against this administration? I mean, come on!” said Ocasio-Cortez. “This should be a slam-dunk, and we don’t have to be afraid of alienating people with morally reprehensible views.”

Schiffrin, noting that the Upper West Side, where the event was held, had been a bastion of American socialism, asked the candidate if she considered it a “moral choice” to be a socialist.

Ocasio-Cortez responded by stating her commitment to “acknowledge the world as it is but to fight for it as it should be.” “A moral economy is one in which a nation that is exceedingly wealthy can work towards the economic dignity of all people,” she said.

On an evening in which news of Judge Brett Kavanaugh, President Trump’s nominee for the Supreme Court, had flooded the headlines, Schiffrin asked the candidate to weigh in on this topic and the position of women in the country. Ocasio-Cortez said the situation with Kavanaugh had been “retraumatizing” for women. She called the MeToo movement an “awakening” because women were able to recognize behavior as abusive that had long been normalized. She described the actions of Senate Republicans who had sought to speed up Kavanaugh’s confirmation after learning of accusations against him as “unforgivable” and wondered at a party that “has a harder time nominating women than people accused of sexual assault.”

Stiglitz closed out the discussion asking Ocasio-Cortez to comment on how women were currently impacting the political scene. The rage of women, she said, had been concentrated in the political process and noted, to thunderous applause, that 256 women have been nominated for the House and Senate in 2018.