Fable of the Squirrels: New Research on Wealth Inequality Among Animals Sparks Debate on Human Economies 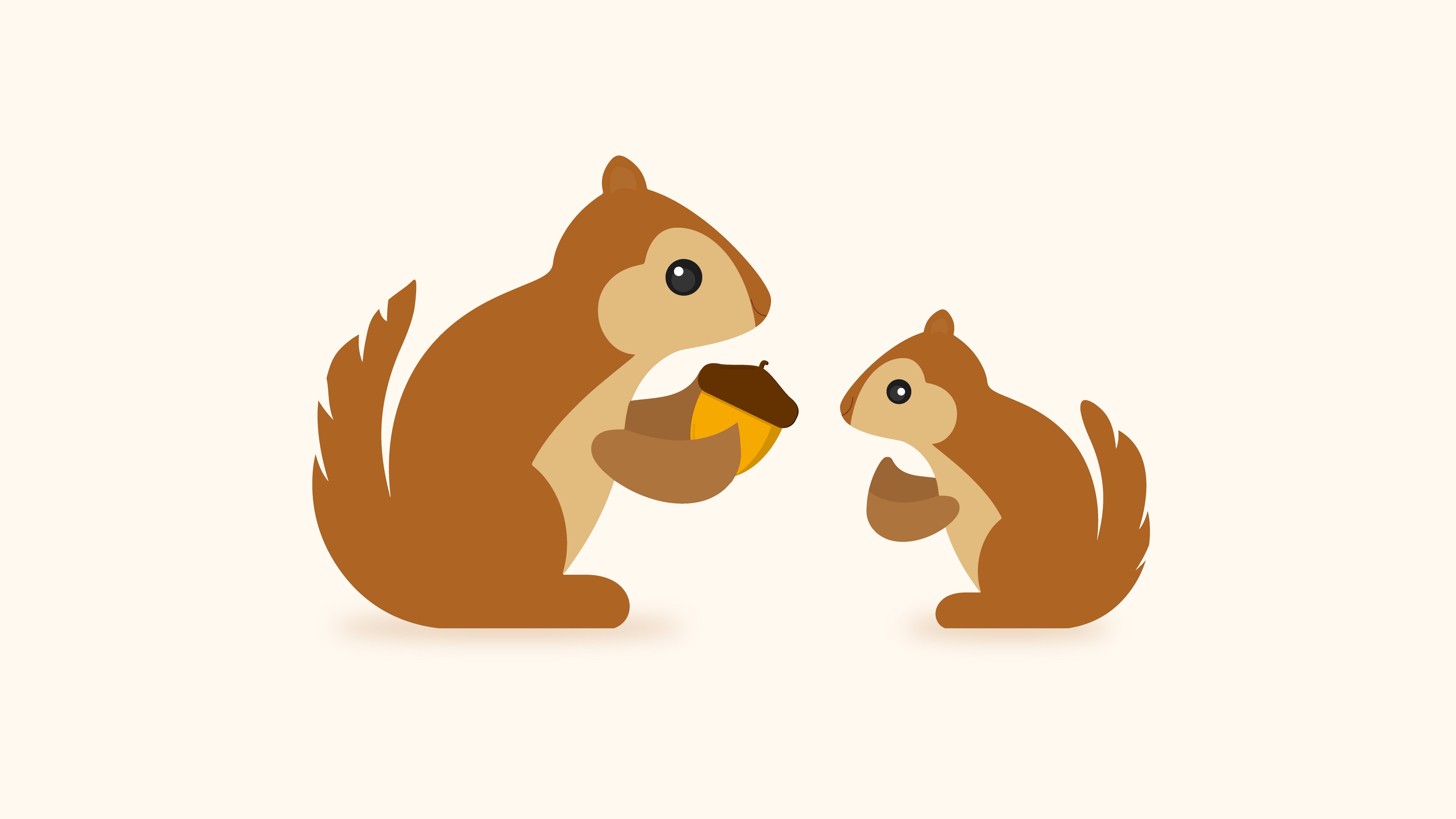 Researchers studying beasts that pass on resources and advantages to offspring have raised the old question of whether humans are destined to live in stratified conditions. Your view may depend on your relative position.

Can we live by values of mutual aid and the sharing of resources, or are we destined for heavily stratified inequality? As long as there have been economies – and one-percenters benefiting from their design — there have been arguments about the “naturalness” of unequal conditions. We’re selfish creatures, so the argument goes, and some of us will just naturally be better off. Suck it up.

A flurry of articles concerning a December 2021 study in the journal Behavioral Ecology featuring new insights into intergenerational wealth and inequality in the animal world has ignited a new round of debate on this ancient topic.

Researchers found that among beasts, it pays to be born into privilege. Certain squirrel mothers who hoard nuts and pine cones, for example, will end up bequeathing food stores to a few of their offspring, thus upping their chances of survival. “Red squirrels are born with a silver spoon in their mouths,” quips the New York Times. High-ranking hyenas are able to pass on status to daughters (they’re matriarchal, those clever hyenas), who inherit the right to the best meat, while some monkeys obtain tools to crack nuts from their parents, giving them extra advantage.

The Times article is quick to state that the researchers were prompted to study the topic out of concern about increasing inequality during the pandemic and simply wanted to see what humans could learn about the topic from nature rather than justify intergenerational wealth.

But it is kind of interesting that this particular bit of research has proven popular with the World Economic Forum (WEF), that august group of global elites which gathers annually in the tony ski resort of Davos (the physical gathering has been postponed this year due to Covid) to tell the world what’s what with the economy. An article sponsored by that body asks readers to consider the clownfish. The clownfish, it turns out, can inherit the right to hiding places from its parents, thus enabling it to avoid predators that snack on less privileged fellows.

Could it be that the clownfish teaches the wisdom of the proposition, “I am privileged, therefore nature must have intended it”? Let’s investigate.

Back in the early Enlightenment, when it was de rigueur for intellectuals to propose theories about the hows and whys of things, Anglo-Dutch philosopher and political economist Bernard Mandeville got to thinking about animals. He found himself in agreement with René Descartes’ (spectacularly wrong) view that animals were little more than physical machines: a cuckoo bird and a cuckoo clock were much the same, only one you don’t have to feed. They’re mindless automata.

Turning his attention to bees, Mandeville penned a satirical poem known as, “Fable of the Bees: or, Private Vices, Public Benefits,” in which he describes the breakdown of a bee community when its members suddenly stop acting in their greedy self-interest and become honest and virtuous. The moral lesson: personal vice translates into public good.

Mandeville advised people to hang up the effort to benefit others or control their passions because it just gets in the way of the state’s commercial and intellectual progress. After all, the circulation of capital demands that people keep buying stuff they don’t need, and it’s therefore critical for people to be greedy and self-absorbed if you want to have a thriving economy. “Luxury Employ’d a Million of the Poor,” asserted Mandeville, “And odious Pride a Million more.” Without vices, people just collapse into an apathetic stupor. Greed is good, the more vicious, the better.

Mandeville’s bee poem created quite a buzz. Revered ever since by the most extreme free-market fundamentalists, despite the fact that the author actually understood precious little about the species he touted as an example to humans. Turns out that bees are highly cooperative creatures, and their communities would collapse if they were unable or unwilling to help each other. The very opposite of what Mandeville argued.

Mandeville’s dim view of human beings as deceitful, mean-spirited hoarders drew its fair share of detractors. Even Adam Smith felt that the philosopher had gone rather too far. Smith declared in his Theory of Moral Sentiments that “How selfish soever man may be supposed, there are evidently some principles in his nature, which interest him in the fortune of others, and render their happiness necessary to him, though he derives nothing from it except the pleasure of seeing it.” Smith also argued that without regulation, corruption and vice would destroy economies rather than help them thrive.

Smith intuited that reducing all human motivation down to egotistical drives ignores our complexity – and much of what makes us thrive, like empathy toward our fellows. Modern researchers have noted that as early as infancy, humans show empathy towards others in distress. A six-month-old baby will get upset to see someone being bullied — and it’s clearly not due to receiving an egotistical hit from exhibiting concern, as some cynics have argued is the only reason we demonstrate care for our neighbor.

Researchers have also found ample evidence of the advantages humans enjoy living in communities that feature mutual support and shared resources. A recent book by the late anthropologist David Graeber, The Dawn of Everything, presents a plethora of examples of such societies going all the way back to the Stone Age.

Nature is brimming with diverse strategies for survival – some we might wish to imitate, and some we would not. The famous ichneumon fly, for example, has hit upon an ingenious way to ensure the survival of its offspring. It lays eggs on another creature’s body and paralyzes it so it can’t move while slowly being eaten alive. Hey, no judgment on the ichneumon, but we probably don’t want to follow its example.

Researchers have also found lots of cases in nature of animals other than bees that survive by cooperating and sharing. Certain parrots, for example, share knowledge about available food with other parrots. Vampire bats will share food with a hungry fellow bat by barfing into its mouth (gross, but effective) and bonobos, those monkeys beloved for their hippie penchant of preferring sex to violence — and also matriarchal — will happily share their chow with friends.

Some animals will even die to protect members of the group, like honeybees. On the other hand, the female praying mantis dines on her mate’s head after copulation, so again, you have to be careful about choosing your examples!

Even if you pick out a hundred cases of animals hoarding resources to privilege themselves and their own offspring, you still have to be mindful of extrapolating the behavior to human societies. That’s because alone among animals, we actually have choices about how we organize ourselves. We get to decide what way of living suits us best.

Here’s something you’re not going to find in the animal world no matter how hard you search – communities that destroy themselves altogether through hoarding. Researchers have yet to identify a Squirrel Gilded Age with gold-encrusted pinecones and fluffy-tailed robber barons. That’s because squirrels don’t have access to two things that humans have: armies and legally protected engines for unlimited capital accumulation.

In the human world, the wealthy are often able to seize control of political systems and use force to protect their privileges, resulting in economies so grotesquely unequal that they threaten the survival of everyone. In the human Gilded Age, we didn’t just have a few parents passing down advantages to some of their kids. We had a sweeping, systemic foul-up of wretched tenements and children huddling in dirt right next to luxury castles built by industrial gazillionaires. The result? The Great Crash followed by the misery of the Great Depression, which even took down quite a few of these gazillionaires. It was the reverse of Mandeville’s bee model.

The fact is that when humans operate on the principle that greed is good, they usually end up creating extremely unstable economies vulnerable to disruption and collapse. As Thomas Piketty has shown, when the rich are able to fatten endlessly through unregulated capitalism, they will drive inequality higher and higher until finally either some bloody catastrophe happens to blow the whole thing up, or a sane government steps in to create more equal and stable conditions. We are currently in the midst of figuring out which way we would like to go this time around: a violent or peaceful transition to something more equitable. (Check out Institute for New Economic Thinking Research Director Thomas Ferguson’s coauthored recent paper to see how this is going).

Fortunately, there’s good news: Unlike squirrels, humans can, and often have, built societies in which there are limits to how much one can hoard and curbs on how badly one can treat one’s neighbor. We have altered our world so that we can overcome diseases, and we can arrange it so that none goes without access to a doctor, too. Humans are a piece of work worthy of Shakespeare’s praise: noble in reason, infinite in faculty. We don’t crap in public, and we don’t need to throw each other to the wolves. Mandeville’s bees are far from the be-all and end-all that free-market fundamentalists thought they were. Beasts make a few choices; humans can make many more.