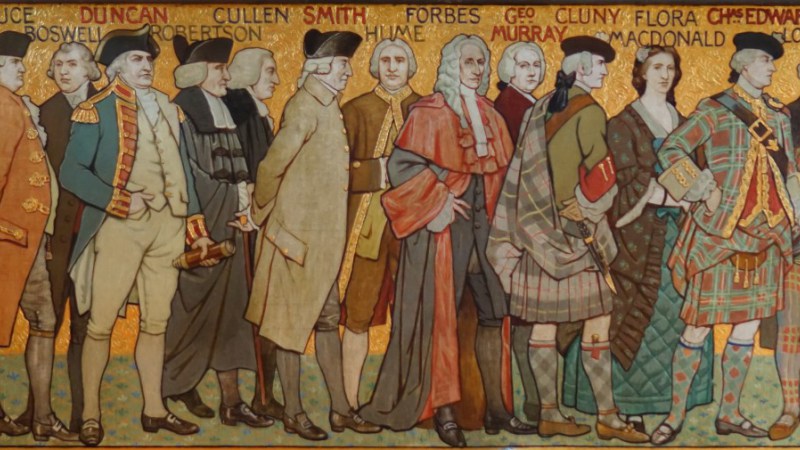 What can today’s economists learn from the 18th century Scottish thinkers who grappled with societal and economic change?

“Reawakening” is the theme of the Institute for New Economic Thinking (INET) conference opening in Edinburgh on October 21. The reference, of course, is to the Scottish Enlightenment of the 18th Century which gave birth to modern economics. But beyond a mere nod to the past, the title of the conference prompts an important question for modern economists: Is there something to learn from the Scottish Enlightenment that can help illuminate the predicaments of today – and if so, what is it?

The Scottish Enlightenment is most associated with two names: David Hume and Adam Smith. But they were not isolated thinkers. The skeptical philosopher and the father of economics formed the kernel of an intellectual clique, centered in Edinburgh, that included, among others, Lord Kames, Adam Ferguson and James Millar. Although not all these names are equally well known today, all contributed significantly to the development of modern ideas about the economy.

The philosophers of the Scottish Enlightenment gravitated around several major themes: the origins of morals, the progress of civilization, economic development and the impact of trade. Although their pronouncements were universal, the questions they chose were informed by parochial concerns relating to Scotland, and the tremendous societal changes the country was undergoing at the time.

The trauma Scotland underwent in the 18th century should be familiar to observers and critics of modern globalization. The 1707 Act of Union thrust poor, stagnant, semi-feudal, agrarian Scotland into a merger with rich, dynamic, capitalist, commercial England. Prior to the act, the two countries had practically no economic or trade relations. But after 1707, Scotland not only opened itself up to foreign economic winds, it also lost control of any policy tools that could direct them. It was perhaps the first globalization experiment, at least on such a scale.

Scots were naturally apprehensive. Would Scotland become rich, like England, or descend into pauperism, like Ireland? Would its society become riven by deep divisions and class conflict such as that found in England? Would Scottish lairds forget their traditional paternalistic obligations towards peasants, and become as aloof, cruel and grasping as English landlords? And what would happen to traditional religion and morals?

By the time of the Scottish Enlightenment, the Presbyterian Kirk (the people’s church) had long been the democratic guarantor in Scotland. Its inquisitorial grip on Scottish society may have been tyrannical and sometimes excessive, but it had kept the ruling classes in check. Although one may smirk at the suggestion that Scotland enjoyed a degree of relative equality and class harmony before 1707, it was closer to the truth here than elsewhere, at least on the surface.

Change was not long in coming after 1707. Given access to English trade and colonies, Glasgow’s merchants soon cornered the American tobacco trade and amassed incredible fortunes. With the typical impertinence of nouveau riche anywhere, the rising Glaswegian merchant class imported very un-Calvinistic fashions from England – fancy clothes, balls, theater and ostentatious palaces – and were soon imitated by the rest of the Scottish upper classes. Inequality had not only arrived in Scotland, it had made itself highly conspicuous.

The once-sleepy towns of Glasgow and Edinburgh sprung to life as new commercial cities. The Presbyterian Kirk relaxed its grip, giving up some of its fire-and-brimstone severity for a modicum of latitude. English-style capitalism crept into the Scottish countryside as well – lairds began introducing agricultural innovations on their land to raise productivity and rents, “improvements” that usually involved the evictions of peasants and breaking long-standing norms of tenancy. Scottish society was gradually losing its traditional features and resembling England more and more every day.

For many Scottish supporters of the union – known as the “Whigs” - all this was welcome. They embraced the new commercial society unfolding before them and relished the imported English habits and new capitalist ethos. Indeed, many stopped identifying themselves as “Scottish” altogether and took up a new moniker – “North Britons” (although it never quite caught on).

But this new world was far from secure, and could all be reversed overnight. Up in the Highlands were Gaelic-speaking barbarous clans, ready to rally to arms at the summons of their chief. In 1690, 1715 and 1745, Highlander armies came pouring down and nearly overran the country. Jacobites, loyal to the cause of restoring the Catholic Stuart lineage to the throne, promised to overturn the union and drag Scotland back to where it was before. Although few Lowlanders sympathized with the insane lost cause of the Jacobites, many of those disturbed by the changes foisted upon Scotland contemplated attaching their cart to it.

Today, globalization makes for strange bedfellows. It is presumptuous to assume that reason, commerce and progress glides ever forward and cannot be reversed. For all the enlightened chatter in the clubs and societies of cosmopolitan cities, there are barbarians perched in the hills ready to smash it all. And it is tempting for the losers in the progress of civilization – the dispossessed, disgruntled and forgotten – to lend their support to destructive trouble-makers, no matter how ridiculous their cause might be.

It is a mistake to dismiss reactions against globalization as a romantic hankering for rustic poverty and fanaticism. There were long-standing social contracts – between rich and poor, lairds and peasants, Kirk and people – that had maintained some sort of harmony in Scottish society. These contracts that were broken in the rush to embrace the commercial age. If the gains from trade were to be preserved, the disruption in social relations needed to be repaired. But in order to be repaired, they must first be understood.

This was the task the Scottish Enlightenment thinkers took up: to understand change, and more specifically to understand how economic change affects society. That is something modern economics would do well to learn from: adopting an approach that is more respectful of historical, social and institutional contexts.

The Scottish thinkers had a dynamic rather than static vision of economy and society. While modern economics seems enamored with mechanical systems, and assumes they will settle into some natural equilibrium, the Scottish philosophers had a more evolutionary outlook, in which economic and social forces do not settle, but rather continue changing. They were not very interested in abstract contemplations about natural society, but rather in a realistic understanding the concrete origins of actual society.

Scottish Enlightenment thinkers tried to explain how economic and social relations actually emerged and changed – through the slow march of history, and in their institutional context – rather than imagine they sprang fully-formed out of some mythical state of nature. While they had strong ideas about economic policy, they did not believe in ideal constitutions. As “Whigs,” most of the Scottish philosophers largely welcomed the union and the new commercial age, but they were simultaneously wary of its consequences and downright pessimistic that it could be smoothly handled by governing elites. They understood that there was much of value in traditional society that was being lost, that discontent could breed revolt and that the road to liberty might end up in tyranny.

We’d be wise to consider their approach – and learn from it – in our modern context, and in our practice of economics today.