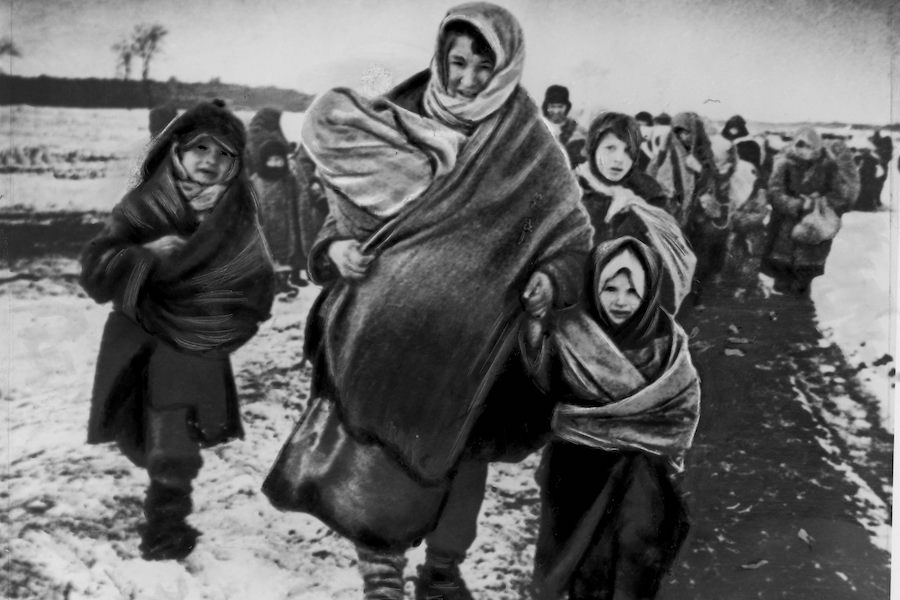 Last June at a History of Social Science workshop , David Engerman presented a paper on the Harvard’s Refugee Interview Project (1950-1954).

Last June at a History of Social Science workshop , David Engerman presented a paper on the Harvard’s Refugee Interview Project (1950-1954). He told the subtle story of a project which was set up by some sociologist and anthropologists with no specific soviet studies background, which was funded by Air Force officials whose academic background entrusted them with intellectual agenda different from the broader -and changing- concerns of their army. He did not only document the tensions between academic freedom and war needs for intelligence, but he also touched upon the consequences of very concrete hurdles (difficulty to interview Russian refugees in Germany because of clearance issues) and details the unintended offsprings of this failed project (the training of a set of graduate students who later became true sovietologists).

Unsurprisingly, subsequent discussions developed along the lines discussed in the 2010 ISIS issue on Cold War scholarship, to which Engerman is a contributor (see Will Thomas’s review of the issue). The audience was divided between those fed up with the “everything cold war” interpretation of postwar science and those who feared that the kind of detailed case study analysis performed by Engerman would make impossible any generalization regarding the influence of the Cold War context.

For Engerman’s case study is indeed embedded in a wider vision. During his talk, he repeated on several occasions one central idea: “disaggregate, you have to disaggregate.” (funding, in the present case). A line of thought he elaborates in his ISIS piece :

Social science in the Cold War, in this formulation, equals Cold War social science. Yet an increasing number of historians are challenging that blithe equation by examining social scientists’ complex relationship to the means of scholarly production; this essay will examine at least three trends in this new scholarship. First, some scholars are broadening their historical perspective by showing how social scientists in the Cold War expanded upon the ideas of their scholarly predecessors. Second, scholars are detailing the dramatic institutional changes of World War II to show how social scientists’ service in the “Good War” shaped structures and assumptions of postwar intellectual life. And finally, more historians are following sponsors’ money not just into scholars’ bank accounts (or summer homes) but into their publications. All three approaches give more agency to social scientists, depicting them as scholars responding to older ideas while working in a new institutional environment and navigating complex relationships with their patrons.

This idea struck a chord with me. First, because of my growing discomfort toward the literature on economics and neoliberalism in the postwar era, in which it is often assumed too easily that such and such research had ideological underpinnings on the sole basis that it was funded by a conservative patron or that its author was a member of a neoliberal organization, such as the Mont Pelerin Society. More fundamentally, the more one dives into the structure of the patrons of postwar economics (from foundations to military agencies to public bodies, NSF etc.), the less it seems that generalizations can be derived from funding patters. For instance, the statement that “economic project X was founded by Ford Foundation” conveys little information in the end. Depending whether the money was granted by Ford Area III or Ford Area V, by MIT economist and CIA alumni Richard Bissell in 1951, by Chicago political scientist Bernard Berelson in 1953, or by Yale labor economist Lloyd Reynolds in 1955, the underlying agenda had to do with Cold War intelligence, the construction of a broad interdisciplinary social science, or the advancement of theoretical economic programs.

We have to “begin to deal more seriously with the fact that, while [scientific] work certainly existed within the Cold War (who would argue otherwise?), it cannot be satisfactorily characterized as a Cold War phenomenon. Other illuminating contexts must be found.” Will Thomas argues in his review of the ISIS issue. True, but it’s not only a question of contexts. More compelling ways to tie old and new contexts to the personal histories and worldviews of the researchers involved, to their commitments, ethical and political leanings, religion, culture, understanding of the role of scientists within society are needed. To chasten the “Everything Cold War” history, one also need to debunk “Puppet history,” that is, narrative in which a wide set of scientists straightforwardly endorse the vision of a “leader” (Simon, Von Neumann, Hayek, Samuelson and Keynes have been fashionable in the past years) or the agenda of a patron.

If such ideas are adopted by historians, then the tricky issue of course becomes “How do you (re)aggregate?” How do you evolve from a maze of microhistories into an overarching narrative of the evolution of economics as a discipline? Will Thomas ties his review to a former post on historiagraphy in which he explains that historians should strive to make the history of the era more “navigable,” by writing papers they are able to “hook” to narratives on comparable institutions, milieu, research problems, communities. Such venture requires a clear picture of how we historians construct our sets of narratives. And our historiography is still fragmentary. It seems, for instance, that the research on the Chicago School of Economics evolved from a focus on a few keys individuals (Friedman, Stigler, Hayek, Knight, Viner, Becker) to a larger perspective that included new figures, extra-academic institutions, extra-economic bodies, and subdiciplines. Yet, I still have little idea whether they was any early concerted effort to write such history. The scholarship on MIT, Samuelson and neokeynesians seems to develop differently, although it’s a bit early to say. Any instance of a successful bottom up approach of the history of a group/subdicipline?

In a forthcoming paper (‘A history better served cold’ to be published in The Cold war in Pieces, Joel Isaac and Duncan Bell eds), Phil Mirowski, author of some of the broadest and most famous narrative on Cold War science, responds to historians’ recent attempts to reevaluate the concept of “Cold war” as an organizing principle to write postwar history. He challenges the “subculture performativity” approach he says characterizes Joël Isaac’s writings. He recognizes that contemporary historians are now able to discern distinctive feature of the “Cold War” science, but ties it to a profound change in the historians’ knowledge regime, a “regime of globalized privatized science.” I have to read more from Isaac and I’m still struggling to understand what is at stake in Mirowski’s claim. The core of Mirowski’s paper, namely its “don’t throw the baby with the bathwater” admonition, nevertheless calls for further consideration. In his effort to show how “frosty” the atmosphere of the forties to eighties was, he outlines three ideas he thinks are worth retaining in future approaches of the cold war intellectual life:

(1) the cold war produced a specific time frame, common to various hard and social sciences, in which it was believed technological and intellectual progress could be planned (a belief to be replaced with the “market of ideas” philosophy in the eighties.)

(2) the interdisciplinarity paradox: the Cold War military patrons are responsible both for the highly disciplinary organization of science within universities, Mirowski argues, and for the foundation of several transdiciplinary independent bodies aimed at fostering creativity in emerging areas.