Who is afraid of Neoliberalism? A comment on Mirowski

While the Neoliberal movement’s concerns extend into a broad political reorganization of society, it remains intimately connected with neoclassical economic thought.

The idea of a Neoliberal Thought Collective (NTC) being a “completely different school of thought” from neoclassical economics is not quite correct. It is true that Neoliberalism transcends the more limited scope of neoclassical economics with a much broader preoccupation with the political reorganization of society. On the other hand, it is hard to think of any Neoliberal author cited by Mirowski that does not fall within the neoclassical school.

Neoliberalism is a term that has suffered the semantic saturation effect. It has been used so often in so many different contexts that it has almost lost its meaning. Philip Mirowski has provided an important reappraisal of the term Neoliberalism and its concealed and unacknowledged relevance intellectual relevance in economics. Mirowski (2014) correctly noted that the widespread confusion about the term Neoliberal has been, to some extent, fabricated and propagated by Neoliberals themselves. The notion that Neoliberalism does not exist has been facilitated by the use of the term by many left of center intellectuals to refer to basically anything that they dislike, “a catch-all short hand for the horrors associated with globalization and recurring financial crises” as argued by Stedman-Jones (2012: p. 2). In particular, Mirowski (2014: p. 8) points out that one should not equate Neoliberalism with neoclassical economics.

Mirowski definition of Neoliberalism is based on the sociology of science. He analyzes a community with a shared set of core ideas in close intellectual interaction, to which he refers as the Neoliberal Thought Collective (NTC). The concept is similar to Kuhn’s concept of normal science, in the sense that its members have a collectively accepted set of ideas, and that they are not trying to break with the conventional wisdom. Note that the idea of a Neoliberal Thought Collective (NTC) being a “completely different school of thought” from neoclassical economics is also not quite correct. It is true that Neoliberalism transcends the more limited scope of neoclassical economics with a much broader preoccupation with the political reorganization of society.

On the other hand, it is hard to think of any Neoliberal author cited by Mirowski that does not fall within the neoclassical school. Many neoclassical economists are not neoliberals in the sense of radical defenders of the free market ideology. In fact, the majority, the so-called New Keynesians, are willing to accept significant amounts of government intervention to deal with market failures, the saltwater “branch of neoclassical economics”, as noted by Mirowski (2014: p. 9). But all Neoliberals fall back into some form the mainstream marginalist story in which equilibrium prices are determined by supply and demand, including the prices of labor and capital. The Chicago School, one might add, is less coherent than often thought, and the old tradition on what it was built according to Friedman a bit of a myth, but it is clear that all members adhere to marginalist principles. In this sense, the Venn diagram that seems more appropriate is presented in Figure 1.[1] 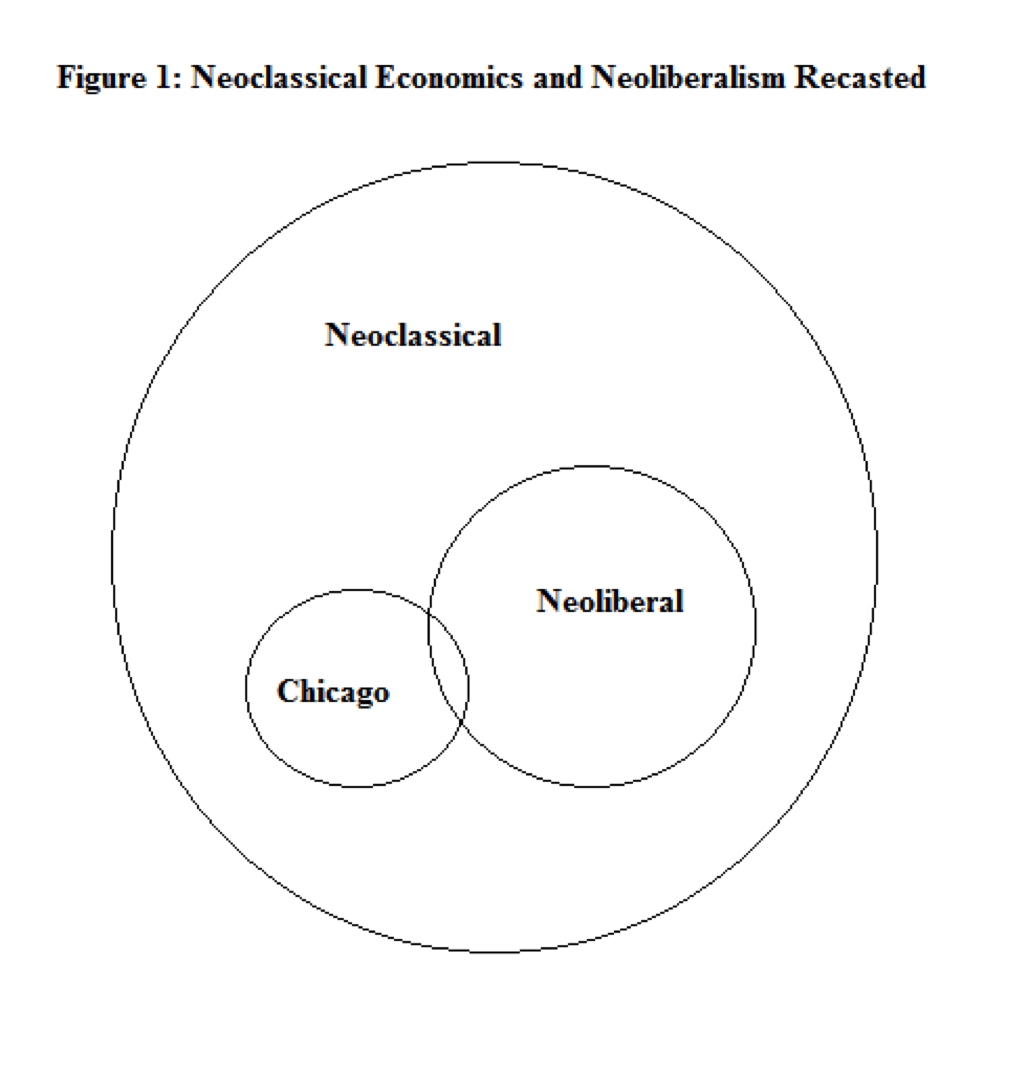 It is also important in this context to note that the term neoclassical, introduced by Thorsten Veblen, is a bit of a misnomer adding to the confusion.[2] The term presupposes a continuity between the old classical political economy authors of the surplus approach – the authors from Petty to Marx, including Quesnay, Smith and Ricardo, that assumed that real wages were exogenously given – and marginalists, the neoclassical economists, which assumed that real wages are endogenously determined by supply and demand like any other price. Adam Smith, for example, was a liberal in the sense of wanting laissez-faire, but his theoretical framework was very different from neoclassical authors like Milton Friedman, a modern champion of free markets.[3] In other words, the policy stance in favor of non-intervention and freedom of markets is a poor guide for the underlying theoretical framework or the political views of the author, which is something well understood by Mirowski. But there is an important implication that is lost in his distinction of the Old Liberals and the more recent Neoliberals, which he sees as a group developing, after and as a reaction to the Keynesian Revolution, around the Mount Pelèrin Society (MPS).

The liberalism of the classical authors was based on the notion that the rising bourgeoisie had a revolutionary role, something noted by Marx in his Communist Manifesto, and was a reaction against Mercantilism and the remnants of the Ancien Régime.[4] Neoliberalism, in contrast, should be seen as the resurgence of a free market ideology, after the onslaught on neoclassical economics by the Keynesian Revolution. It was the ideology of the anti-New Deal, anti-Keynesian conservatives, which was finally victorious in the 1970s, when the marginalist ideas had already proven to be incoherent by the capital debates.[5] In other words, while the old liberalism was a progressive ideology at the service of the nascent capitalist system radical transformation of the structure of production and the social relations associated with it, the modern resurgence of neoliberalism is a conservative ideology at the service of the maintenance of the status quo. It is fundamentally what can be referred as the return of vulgar economics (Vernengo, 2013).

The rise of vulgar economics correlates with the dominance of Neoliberal ideas has been mistakenly connected to the notion of a small State. As Mirowski notes, Neoliberalism is less about the reduction of the size of the State, than the changing of its functions, and the use of the power of the purse to promote the interests of corporations. This indicates a certain degree of intellectual duplicity at the core of the NTC. But there are many layers to what may be termed the organized hypocrisy of NTC. This is what Mirowski (2014: p. 30) identifies as: “the ubiquitous political necessity of saying one thing and doing another.” For example, in spite of their praise of individualism, democracy, and open societies, Neoliberals tended to group in organizations that were closed, not particularly democratic, and somewhat dogmatic, with little or no dissent admitted within the ranks of organizations like the MPS. Paraphrasing Karl Popper, the MPS and fellow Neoliberals might as well have been called the Closed Society and its Friends.[6]

But at the core of the organized hypocrisy of the NTC is the lack of preoccupation with the logical consistency or the empirical evidence favoring the notion that markets are indeed efficient when unregulated and unconstrained by government intervention. The incredible limitations of the whole intellectual project are made clear by Stedman Jones (2012: p. 88), who argues that: “Neoliberals were not usually exercised by the question of how … [the] neoclassical models could be proved or whether they worked.” In fact, Neoliberals in general extended neoclassical principles into unexplored areas, leading to more radical insights on the areas of monopolies, trade unions and regulation, denoting the ideological zeal of the preacher, rather than the logical and empirical search for knowledge of the researcher, even if the latter is not always neutral.

Organized hypocrisy is also visible in the more recent reaction to the so-called Great Recession, and the brief revival of Keynesian principles. For example, the International Monetary Fund (IMF) has accepted that, at least in the short run, fiscal policies are necessary for recovery.[7] On the other hand, analysis of the IMF programs suggests that austerity policies are still the main policy prescription. Neoliberalism not only exists, as Mirowski makes patently clear, but also is thriving in the aftermath of one of the worst crisis of capitalism. The theoretical foundations of Neoliberalism are essentially connected to the revival of marginalist (neoclassical) ideas after the Keynesian Revolution and the capital debates, and it would be a mistake to delink it from the resurgence of vulgar economics.

Vernengo, M. 2013. Conversation or Monologue: On Advising Heterodox Economists with Addendum. In F. Lee and M. Lavoie (eds.) Defense of Post-Keynesian and Heterodox Economics: Response to their Critics. London: Routledge: 158-171.

Vernengo, M. and Ford. K. 2014. Everything Must Change so that the IMF Can Remain the Same: The World Economic Outlook and the Global Financial Stability Report. Development and Change, 45(5): 1193-1204.

[2] Keynes, who denominated all authors that preceded his General Theory as classical, caused an alternative version of the same confusion.

[3] That is not the case of Ricardo, who was a radical and his classification is more complicated, and even less of Marx, a critical revolutionary socialist.

[4] The fact that liberalism is used to designate progressive or left of center views in the US and the opposite in France and Latin America is, in part, associated to this more nuanced understanding of the term liberalism. Perhaps, while in France the rise of Socialism in the 19th century relegated liberalism to the right wing of the political spectrum, and similarly in Latin America, where French intellectual trends were influential, in the US the absence of a more significant and electorally successful Socialist or Social Democratic movement implied that liberalism was still seen as relative left of center.

[5] Before the capital debates Neoliberals where a minority within the neoclassical camp. On the theoretical level, the capital debates exposed the limitations of marginalism, as accepted by Samuelson (1966). On the political front, the collapse of the Golden Age of capitalism in the 1970s, and the acceleration of the 1970s allowed seemed to indicate the limits of the Keynesian consensus. The tensions within the non-Neoliberal, but neoclassical, consensus implied that by the 1980s Neoliberals, if not in the majority, were the dominant group within the mainstream of the profession. According to Lucas (1980) people giggled when Keynesian – meaning neoclassical synthesis Keynesian – ideas where presented at seminars. For a discussion of the role of the capital debates in the rise of vulgar economics see Cline et al. (2010).

[6] The dogmatism of the mainstream at this point reached incredible heights. Krugman (2010) confesses openly how hypocrisy played a role in his publication strategies. He says: “By the early 1980s it was already common knowledge among people I hung out with that the only way to get non-crazy macroeconomics published was to wrap sensible assumptions about output and employment in something else, something that involved rational expectations and intertemporal stuff and made the paper respectable. And yes, that was conscious knowledge, which shaped the kinds of papers we wrote. So you could do exchange rate models that actually had realistic assumptions about prices and employment, but put the focus on rational expectations in the currency market, so that people really didn’t notice. Or you could model optimal investment choices, with the underlying framework fairly Keynesian, but hidden in the background. And so on.” In other words, the actual beliefs are hidden within models that are acceptable to Neoliberals.

[7] See Vernengo and Ford (2014) for a discussion of the double discourse within the IMF.

Related to this paper