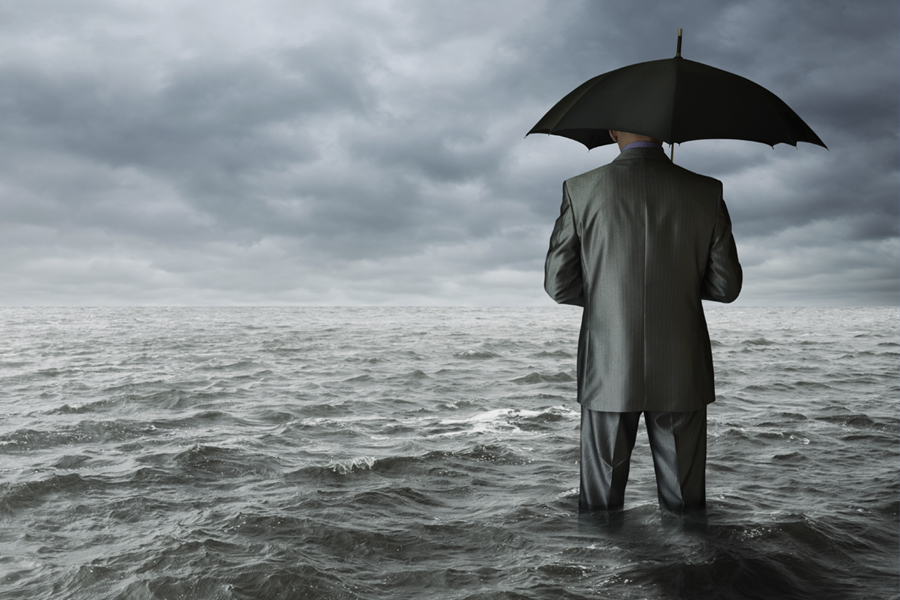 Alan Taylor, a professor and Director of the Center for the Evolution of the Global Economy at the University of California, Davis, has conducted, along with Òscar Jordà and Moritz Schularick, ground-breaking research on the history and role of credit, partly funded by the Institute for New Economic Thinking. He finds that today’s advanced economies depend on private sector credit more than anything we have ever seen before. His work and that of his colleagues call into question the assumption that was commonplace before 2008, that private credit flows are primarily forces for stability and predictability in economies.


If current trends continue, Taylor warns, our economic future could be very different from our recent past, when financial crises were relatively rare. Crises could become more commonplace, which will impact every stage of our financial lives, from cradle to retirement. Do we just fasten our seatbelts for a bumpy ride, or is there a way to smooth the path ahead? Taylor discusses his findings and thoughts about how to safeguard the financial system in the interview that follows. 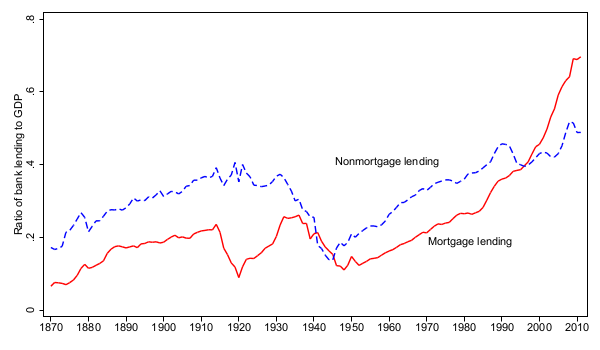 Mortgage (residential and commercial) and non-mortgage lending to the business and household sectors. Average across 17 countries.

Lynn Parramore: Looking back in history at 17 countries, you discovered something interesting about the private sector financial credit market. What did you find?

Alan Taylor: Our project compiled, for the first time, comprehensive aggregate credit data in the form of bank lending in 17 advanced countries since 1870, in addition to some important categories of lending like mortgages.

What we found was quite striking. Up until the 1970s, the ratio of credit to GDP in the advanced economies had been stable over the quite long run. There had been upswings and downswings, to be sure: from 1870 to 1900, some countries were still in early stages of financial sector development, an up trend that tapered off in the early 20th century; then in the 1930s most countries saw credit to GDP fall after the financial crises of the Great Depression, and this continued in WWII. The postwar era began with a return to previously normal levels by the 1960s, but after that credit to GDP ratios continued an unstoppable rise to new heights not seen before, reaching a peak at almost double their pre-WWII levels by 2008.

LP: How is the world of credit different today than in the past?

AT: The first time we plotted credit levels, well, we were almost shocked by our own data. It was a bit like finding the banking sector equivalent of the “hockey stick” chart (a plot of historic temperature that shows the emergence of dramatic uptrend in modern times). It tells us that we live in a different financial world than any of our ancestors.

This basic aggregate measure of gearing or leverage is telling us that today’s advanced economies’ operating systems are more heavily dependent on private sector credit than anything we have ever seen before. Furthermore, this pattern is seen across all the advanced economies, and isn’t just a feature of some special subset (e.g. the Anglo-Saxons). It’s also a little bit of a conservative estimate of the divergent trend, since it excludes the market-based financial flows (e.g., securitized debt) which bypass banks for the most part, and which have become so sizeable in the last 10-20 years.

LP: You’ve mentioned a “perfect storm” brewing around the explosion of credit. What are some of the conditions you have observed?

AT: We have been able to show that this trend matters: in the data, when we observe a sharp run-up in this kind of leverage measure, financial crises have tended to become more likely; and when those crises strike, recessions tend to be worse, and even more painful in the cases where a large run-up in leverage was observed.

These are findings from 200+ recessions over a century or more of experience, and they are some of the most robust pieces of evidence found to date concerning the drivers of financial instability and the fallout that results. Once we look at the current crisis through this lens, it starts to look comprehensible: a bad event, certainly, but not outside historical norms once we take into account the preceding explosion of credit. Under those conditions, it turns out, a deep recession followed by a long sub-par recovery should not be seen as surprising at all. Sadly, nobody had put together this sort of empirical work before the crisis, but now at least we have a better guide going forward.

LP: How do your findings differ from the typical economic textbook story about the role of credit?

AT: I think it’s fair to say that most economic textbooks have had little to say about the role of credit, at least outside the traditional money and banking courses.

Certainly in most macroeconomics courses, both graduate and undergraduate, this topic got little attention before the crisis. However, the classroom approaches are certainly changing nowadays, and that’s a welcome development. It might take a bit of time to filter down into the textbooks, but it will eventually. It’s just very hard to teach a class of students about what has happened in the Global Financial Crisis, how we ended up there and how we got to where we are today, without having some basic, non-trivial understanding of the financial sector, credit, and the banking system. From a purely descriptive standpoint, our efforts to collect historical data establish many important facts that help to frame that discussion, and our statistical analysis sets out some of the key relationships that theories need to explain. But there’s obviously much more to do.

LP: How will the dramatic increase in private sector credit potentially affect our lives as we try to do things like save for retirement?

AT: In the immediate postwar era, financial crises in advanced countries were rare events, and before 1970 did not happen at all. Since then they have occurred more often, and 2008 was the most damaging of them all to date. If we have moved back to a regime of regular financial crises — like the one we had from the 1870s to the 1930s — then our economic future will be very different from our recent past.

Macroeconomic stability will be more elusive and that will affect all of our lives: from the risks many will face in childhood, to the security of employment at working age, to the challenge of accumulating for retirement. More financial instability will introduce more uncertainty all down the line, and that will be a very different world than the one we would have lived in only a couple of decades ago. But that period of calm also tells us that such instability isn’t necessarily a fact of life, and addressing that is likely to be the policy challenge going forward.

LP: Do you think there is a chance that the world might return to something like the pre-1970s historical norms, which would imply tighter credit?

AT: It’s tough to make predictions. We have never in human history seen a run-up in credit of the kind we have just witnessed in advanced economies since 1970, and we have never observed modern finance-capitalist systems operating over a sustained period at this kind of credit-to-GDP leverage ratio. So anything I have to say here is out-of-sample speculation. In fact will credit even tighten at all?

I would guess three outcomes are possible. The first is that we gradually and slowly delever, and advanced economies operate at a credit-to-GDP ratio similar to the 1950s or 1960s, a period when we had strong growth and no financial crises. The puzzle then is how we redirect retirement and other desired saving currently going into credit channels, or at least outside the banking systems. We may end up with a world based more on equity than debt, or more on market debt instruments than bank intermediation; but how and why we get there is a mystery. Absent significant regulatory or tax changes, and a sharp transition could be disruptive.

A second possibility is that we stabilize at current levels of leverage, with some ups and downs, but no further rise in credit to GDP over the long run; firms and households do not lever up further and banks do not expand their balance sheets, but they are persuaded to bolster their capital and liquidity provisions for prudential reasons to mitigate the risks of operating a high leverage system.

The third possibility is that we see more and more leverage, and credit-to-GDP ratios rise once more to even higher levels; eventually the banking systems of all advanced economies reach magnitudes of 500 percent, 1000 percent or more of GDP, so that every economy starts to have financial systems that resemble recent cases like Switzerland, Ireland, Iceland, or Cyprus. That might be a very fragile world to live in.

LP: What measures can policy-makers take to restore balance and sustainability to the credit system? What do you think might be their costs and benefits?

AT: The news here is that much has changed since the crisis. The direct fiscal costs of bailouts, and the even larger indirect fiscal costs of massive recessions (unemployment, low growth, fiscal strains, etc.), have made the status quo unpalatable to governments and the taxpayers behind them. For most, another crisis like 2008 is not acceptable. Operating in this milieu, the central banks, the governments, the Bank for International Settlements (BIS), the International Monetary Fund (IMF), and other parts of the macro-financial policy world are now taking a much keener interest in what the pros and cons of different financial regulatory structures and various macroprudential tools (designed to identify and lessen the risks to the financial system) might be.

Echoing many others, for example, Alan Greenspan has noted that the idea that the financial system be left to largely run itself based on enlightened self-interest is a flawed approach. But the alternative isn’t obvious. The benefits of tighter macroprudential controls on credit are, hopefully, fewer costly crises of the kind we just lived through; but a potential trade-off is there, the concern that if we tighten credit too much, we might slow down growth as the price to be paid for diminishing volatility. How to understand that set of choices, and find the best outcome, is a vexing challenge which policymakers and economists must now confront.