Lehman Was Not Alone – Measuring System Risk in the 2008 Crisis

what would measures of systematic risk have indicated to Treasury Secretary Paulsen if they had been available at that time?

On September 15, 2008, Lehman Brothers filed for bankruptcy and ushered in the worst part of the recent financial crisis. Today, we still discuss whether taxpayer money should have been used to rescue Lehman. My colleagues at NYU and I have developed measures of systemic risk, and this fifth anniversary affords us a good opportunity to look at what these measures would have indicated to Treasury Secretary Paulsen if they had been available at that time.

The answer is quite surprising.

We estimate the amount of capital that a financial institution would have to raise in order to continue to function normally if we have another financial crisis like the one in 2008. This is interpreted as a capital cushion to protect against a decline of 40% in the broad equity market over the six months after this occurs. The rationale is that if all financial firms have an adequate capital cushion there cannot be a financial crisis. If one firm needs to raise capital under such circumstances, it is likely that the market can provide it or competitors can absorb its market share. But if many firms try to raise capital in the middle of a financial crisis, there is no source except the government.

We call this measure SRISK. We compute it weekly and post it on the website ‎systemicrisk. The estimation uses equity prices with methods that are extensions of the volatility models that formed the basis for my Nobel Prize. SRISK combines information on size, leverage, and risk to indicate how serious a default would be.

On the website, you can go back to August 29, 2008, to see the ranking of U.S. firms based on SRISK. . Was Lehman at the top of the list in 2008? No. In fact, it was Number 11. The top of the list was Citigroup, which was estimated to need $139 billion. Following Citi, in order, were JPMorgan Chase, Bank of America, Morgan Stanley, Merrill Lynch, Freddie Mac, AIG, Fannie Mae, Goldman Sachs, and Wachovia. Interestingly, all of these institutions were either nationalized or rescued, with the arguable exception of JPMorgan Chase. 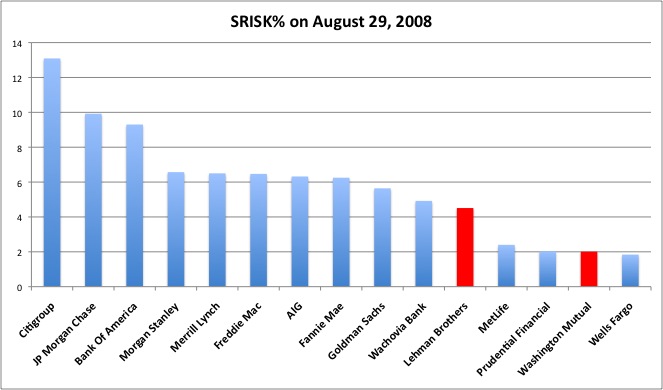 Thus, the policies that were followed were quite in line with the SRISK measures. But is it enough to rescue only the Top 10 banks in a financial crisis? Where should we stop the bailouts?

The best answer is not to get in this situation in the first place. And that is why financial regulatory reform is so important. 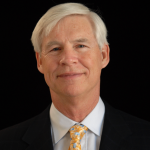