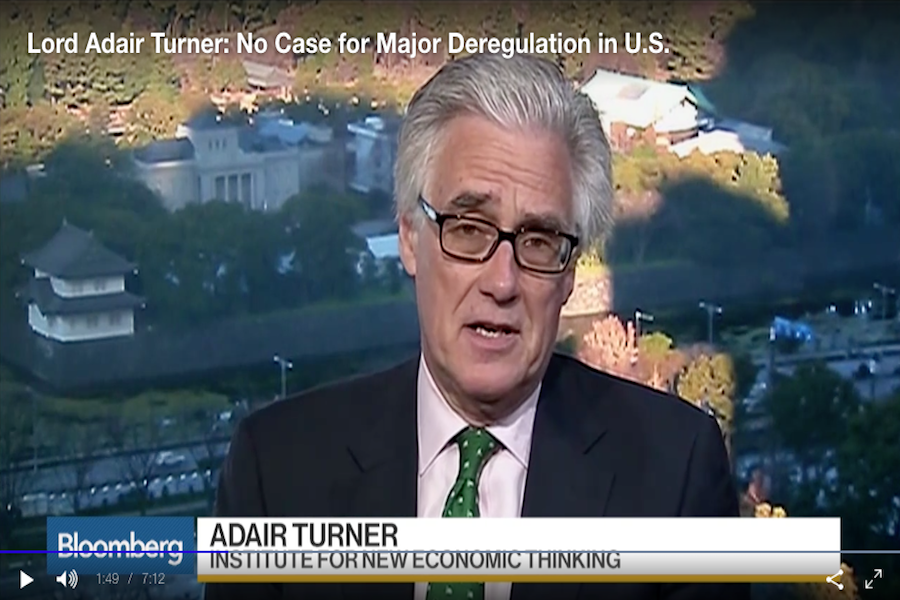 There is no good case for major deregulation of the US financial sector, warns INET Board Chairman Adair Turner, and any backsliding by a Trump administration on banks’ capital requirements instituted globally after 2008 will be very dangerous

Higher capital requirements on banks were a vital regulatory step to make the global financial system safer following the 2008 crash, notes Institute for New Economic Thinking Chairman Adair Turner in a Bloomberg TV interview on Thursday, and they remain a critically important safeguard. “It is absolutely crucial that there’s no undermining of those requirements” said Turner, contemplating the deregulation agenda promised by incoming U.S. president Donald Trump.

Turner, a former head of the UK’s Financial Services Authority, is skeptical of the benefits and mindful of the perils of attempting new deregulation of the financial system. “There is no good case for major deregulation,” he argued. “The idea that America or any other major economy is being held back by too much regulation is a fantasy.”

Trump could have a positive impact on the anemic global economy, Turner suggested, if he enacts a significant fiscal stimulus plan, particularly if that is focused on infrastructure. “But the idea that there’s a pot of gold at the end of a deregulation agenda is pure fantasy.”