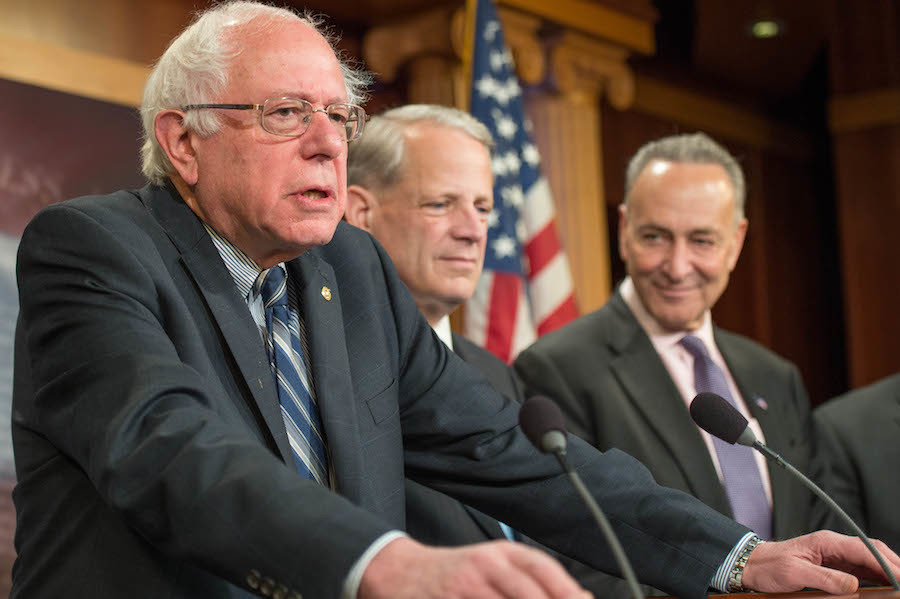 We need to ban stock buybacks, while building a movement for basic economic rights

In this article, William Lazonick draws on his research on stock buybacks to discuss legislation recently proposed by Senators Chuck Schumer and Bernie Sanders in The New York Times.

For over three decades, trillions of dollars in corporate stock buybacks have contributed to unstable employment, inequitable income, and diminished innovation in the U.S. economy. Enabling, and even encouraging, this “legalized looting of the business corporation” is SEC Rule 10b-18, adopted in November 1982. Reflecting Ronald Reagan’s “free market” agenda, Rule 10b-18 became integral to the implementation of shareholder-value ideology, with extreme income inequality as the result.

In a recent New York Times op-ed, Senators Chuck Schumer (D-NY) and Bernie Sanders (I-VT) announced a bill that seeks to rein in stock buybacks and improve labor conditions, all in one fell swoop. Specifically, they state that their bill “will prohibit a corporation from buying back its own stock unless it invests in workers and communities first, including things like paying all workers at least $15 an hour, providing seven days of paid sick leave, and offering decent pensions and more reliable health benefits.” While the impulse behind the Schumer-Sanders bill is laudable, the proposal to confront corporate financialization and fair labor standards in one piece of legislation displays a certain immaturity of the Democratic Party in confronting issues of corporate governance and regulation that have for all too long been ignored.

Although the problem of buybacks dates back to the mid-1980s, it appears that prior to late 2014 Congress discussed it only once: in July 2008 when Schumer, along with Senator Robert Menendez (D-NJ) and Representatives Rahm Emanuel (D-IL) and Ed Markey (D-MA), took aim at buybacks by the big oil corporations following Exxon Mobil’s announcement that $8.8 billion of its record-setting $11.7 billion in second-quarter profits would go to buybacks. The Congressmen asked oil executives to reduce buybacks for the sake of increasing oil production and alternative-energy R&D. There is no evidence that their plea received any attention.

In the 2008-2009 financial crisis, Congress bailed out banks and insurers that had done massive buybacks in prior years. Yet discussion of buybacks was entirely absent from the policy debates that resulted in the 2010 Dodd-Frank Act. Four years later, the publication of my Harvard Business Review article, “Profits Without Prosperity: Stock Buybacks Manipulate the Market and Leave Most Americans Worse Off,” helped to break this Congressional silence.

Sen. Elizabeth Warren (D-MA) was first out of the blocks, recognizing in a Senate hearing on income inequality in September 2014 that since the 1980s distributions of corporate cash to shareholders as buybacks, on top of ample dividends, had put an end to “shared prosperity” in the United States. This perspective on corporate financialization motivated her Accountable Capitalism Act, put forward in August 2018, with a House version of the bill introduced in December. This Act would create, for the largest corporations, national charters that would, among other things, regulate stock-based executive pay and provide workers with board representation.

Since 2015, Sen. Tammy Baldwin (D-WI) has been Congress’s most persistent critic of stock buybacks, opposing them in letters to the SEC, confronting pharmaceutical companies for using high drug prices to increase distributions to shareholders, and questioning SEC nominees on their positions on buybacks. After joining with Schumer and other Senate Democrats in the “#GOPTaxScam” campaign that predicted—correctly—that corporations would use the gift of lower taxes to increase buybacks, Baldwin took the lead in writing a letter to SEC Chair Jay Clayton, signed by 21 senators including Schumer and Warren, requesting a period of public comment on Rule 10b-18. Of most significance, in March 2018 Sen. Baldwin introduced the Reward Work Act, which by rescinding Rule 10b-18 would make open-market repurchases, those to which Rule 10b-18 applies, subject to manipulation charges, while allotting seats on corporate boards to workers’ representatives.

For his part, Sen. Sanders published a 2015 Boston Globe op-ed, “The war on the middle class,” in which he recognized that repurchases come at the expense of workers and argued: “We must demand an end to stock buybacks.” That’s very different from the argument in the Schumer-Sanders bill. To sanction buybacks for companies that meet certain labor standards is analogous to permitting a burglar to rob your house as long as he gives you a kickback from the proceeds. There is a straightforward way to limit stock buybacks: Rescind the ill-conceived Rule 10b-18.

As for the improved wages and benefits that Schumer and Sanders propose, let’s elect more members of Congress who will support appropriate amendments to the Fair Labor Standards Act, in force since 1938. For example, in October 2018 Representative Rosa DeLauro (D-CT) and Senator Patty Murray (D-WA) co-sponsored the Healthy Families Act, which would provide sick leave to employees. The Schumer-Sanders proposal puts a spotlight on the task of reversing more than three decades of vulture capitalism. There is, however, no need to try to kill two malignant birds with one legislative stone.