After the election, what’s next for Greece?

After the recent election brought a center-right coalition to power, what’s next in the Greek crisis? Are we finally in the clear? Not so fast, Greek economist Yanis Varoufakis says. Varoufakis explains the real outcome we can except after Greek voters’ “contradictory verdict,” where 55% voted for anti-bailout parties yet a pro-bailout government resulted due to the nature of Greece’s electoral system.

The previous bailout (Bailout Mk2), is obviously not up to dealing with the new facts on the ground. So we’re in for a Bailout Mk3, Varoufakis says. Mk3 will represent a “relaxation of the terms of conditions of Bailout Mk2,” he says. “This relaxation will be heralded both in Greece and internationally as a triumph.”

But this is merely what Varoufakis calls a “Bailout Mk2-lite,” and he suggests it “will be the worst possible outcome for Greece and a calamitous one for Europe.”

The bailout will do nothing to fix the real problem, that “the Greek economy is well and truly broken [and] even efficient, profitable firms have been cut out of the international markets.” Varoufakis sees the loosening of bailout conditions as just prolonging the slow water torture of watching the Greek economy and society go down the drain.

Instead, Varoufakis suggests that just throwing more money at the problem isn’t the answer, or, as he says, “throwing more good money after the mountains of bad money that has gone into the pit of Ponzi Austerity is pointless. What we need now is a different logic.”

He suggests three steps to get the euro back on track:
1) Direct recapitalization of Europe’s ailing banks from the EFSF
2) Shifting the Maastricht compliant debt of the periphery countries to the ECB with ECB bonds issued in parallel
3) An investment-led recovery program finance by the European Investment Bank and the ECB (what Varoufakis calls in his recent book on the global crisis, The Global Minotaur, the “surplus recycling mechanism” that the eurozone has been lacking to prevent the systemic buildup of trade imbalances)

But to get the ball rolling, he suggests, the Greeks must stand up to the Germans and suggest that the serial Greek bailouts come to an end. Does the newly elected coalition have the ability to accomplish this? Unfortunately not, Varoufakis says, as the New Democracy party in Greece “won the day on a promise to blink from the outset.”

So while the Greek elections may have calmed Grexit fears, we’re still a long way from real progress. “Europe may have got its wish this weekend,” Varoufakis says. “Soon, however, it will be reminded, yet again, that the most vengeful god is the one who grants such wishes.” Will it then be too late for Europe? 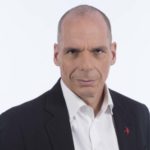