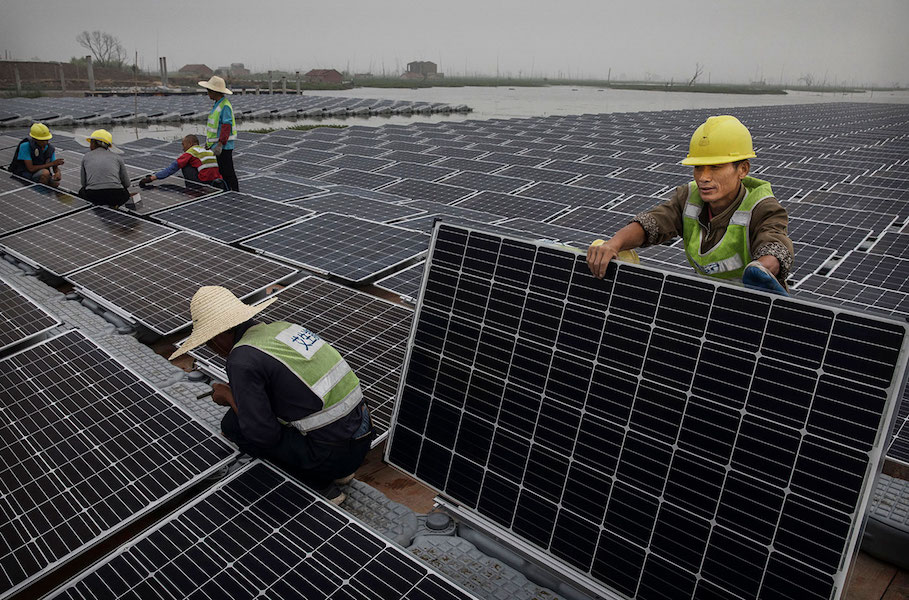 Faced with rapid cost reductions for clean electricity generation, some commentators suggest that we no longer need the Paris agreement or other policy interventions, because technology alone can solve all problems.

President Donald Trump’s decision to withdraw the United States from the Paris climate agreement is deeply regrettable and based on flawed economic analysis. But unstoppable technological progress, plus determined action by other countries, companies across the world, and American cities and states, will ensure that Trump does not derail progress toward a low-carbon economy.

Trump claimed that the Paris accord would cut US GDP by $3 trillion by 2040. But the study he quoted absurdly assumes that American emissions reductions would be unmatched by action in other countries. Crucially, too, it ignores the technological revolution now transforming the economics of electricity generation.

In response, coal advocates ask what happens when the wind doesn’t blow or the sun doesn’t shine. US Energy Secretary Rick Perry has commissioned a study on the need for “baseload generation,” hoping that it will say that coal-fired power generation remains essential.

But analysis by the Energy Transitions Commission (ETC) shows that, with battery costs also falling rapidly (down around 70% in 5 years), fossil-fuel baseload plants will no longer be needed. Within 15 years, we will be able to build energy systems in which 90% of electricity is generated by wind or solar plants, at a total cost, covering all storage and backup requirements, of just $0.07 per kWh. This is fully competitive with current costs of fossil-fuel energy.

This technological revolution transforms the potential for low-carbon growth. Until recently, it was assumed that countries like India, which likely needs to triple its electricity supply within 20 years to support rising living standards, could not avoid massive increases in coal-fired generation. But a study by The Energy and Resources Institute of India illustrates that once renewables can achieve an all-in cost of $0.07 per kWh, they will be able fully to support India’s growing power needs.

As a result, while past projections assumed that coal use in India must rise to at least 1,500 million tons per year, it could peak at 900 million tons and then decline. Indeed, China’s coal consumption has been falling for three years. Britain’s fell 50% in 2016, and on April 21 of this year, Britain enjoyed its first-ever day of coal-free electricity. ETC estimates show that power decarbonization could deliver half the emissions reductions required to meet the Paris accord’s objective of limiting global temperature increases to well below 2°C, relative to the preindustrial age – and without the income losses of which Trump mistakenly warns.

Faced with this success, it might even seem that we no longer need the Paris agreement or other policy interventions, because technology alone can solve all problems. But that is a utopian delusion, for three reasons.

First, we would never have achieved today’s wind and solar costs without large subsidies for initially high-cost renewables (up to €0.40 per kWh in Germany). These subsidies drove technical development and large-scale deployment, in turn producing such dramatic cost reduction that subsidies are now no longer required.

Second, while decarbonization of electrical power is essential and inevitable, it is not sufficient. Even if we extend clean electricity to as many activities as possible – electrifying autos, light vans, and much residential and commercial heating – we will be left with vital economic activities such as aviation, long-distance road freight transport, and steel and cement production, where electrification is unlikely to be a complete or cost-effective answer, at least for several decades.

Technological options to decarbonize these sectors do exist – including bioenergy, using hydrogen as an energy carrier, and processes to capture, and then store or use, CO2 from industry. But the cost of these technologies has not fallen at anything like the pace achieved in renewables, and current investment levels are insufficient to drive self-reinforcing cost declines. Public policy support and cross-industry cooperation, simultaneously applied in many countries, are needed to replicate the progress achieved in renewables.

Finally, while renewables costs will inevitably continue to decline, fossil-fuel prices probably will fall, too, and for the same reason – dramatic technical progress. Shale oil and gas extraction costs have fallen in some locations by 60% as companies apply advanced data analytics and automation to improve success rates and cut drilling costs.

But ever lower fossil-fuel prices could seriously undermine progress toward the Paris accord’s objectives, by slowing (though not eventually preventing) the decarbonization of energy supply, and by inducing demand “rebound” effects, with consumers using cheap, abundant energy wastefully. To offset that danger, we need some form of carbon pricing, introduced in many countries in parallel. That will require international cooperation of the sort that the Paris agreement, however imperfectly, seeks to achieve.

So, however stunning the technological progress, we will always need Paris. But the global reaction to Trump’s decision should leave us confident that we always will have Paris (or subsequent forms of international cooperation).

All other major countries have committed to maintaining their commitment to the Paris process. Numerous major companies, including many US firms and fossil fuel producers, have done the same. So, too, have the many major US cities and vitally important states such as California now supporting the “We are still in” campaign. They have rightly concluded that technological progress, nurtured by appropriate policy support, can deliver low-carbon economies alongside rising prosperity.