Growth, Debt, and Past versus Future: A Visual Elaboration

How does debt influence growth?

Recently, we have seen a number of explorations of the timing of growth around episodes of high debt as a way to discern the likely direction of causality in that relationship. This is important, because we doobserve that there is a negative correlation between contemporaneous debt and growth. For instance, this is true when using the corrected data from Reinhart and Rogoff, and equal weighting of country-year observations. Although there is no evidence of tipping points, a negative relationship remains.

In a blog post in April, I showed that the timing of this negative relationship went against an interpretation where high debt caused low growth. I showed that relationship between contemporaneous debt with futuregrowth is much weaker than that with past growth—which is suggestive of reverse causality. I used a 3-year window for this exercise. In other words, if we label current year as “0” I took the average growth rates in years 1,2 and 3. In a more recent column at Quartz, Kimball and Wang’s follow-up analysis showed the relationship using a window between years 5-10. In a working paper I that I wrote based on my blog post—but posted online after Kimball and Wang’s column—I followed the recent literature in taking a 5-year forward average growth rate, i.e., average growth taken over years 1-5.

The general tenor of these findings is that the further into the future that the window stretches, the more attenuated the debt-growth relationship seems to be. However, the same does not appear to be true when considering windows stretching backwards in time: current debt is indeed strongly associated with past growth.

But how sensitive are these results to specific window lengths? More generally, as suggested by Evan Soltas, how do these results look when using windows of alternative lengths? That’s exactly what I’ll do here, by plotting the coefficients and confidence bounds for bivariate regressions of growth from alternative windows on contemporaneous debt. For example, the window labeled -2 uses average growth rates from dates -2 and -1. Similarly, the window labeled 3 uses growth rates from dates 1, 2 and 3.

The results are stark, and confirm what we have already seen. The bivariate regression of current growth on current debt is around -0.018, meaning a 10 percentage point higher debt ratio (e.g., 110 versus 100) is associated with a lower growth by 0.18 percentage points. This relationship is statistically significant at conventional levels using country-clustered standard errors. However, a 10 point higher debt ratio is associated with an even lower average growth 3, 5, or 10 years back, and this apparently spurious relationship appears stronger the further we roll back our window, clocking lower growths by 0.25 points or more in magnitude.

In contrast, the further forward we roll our window, the weaker the relationship appears to be, falling roughly by 1/3 when we merely consider the growth rate in the next year. And it attenuates further when we take future rates: a 10 point higher debt ratio is associated with merely a 0.05 point lower growth in the next 10 years, which is statistically indistinguishable from zero.

There is, however, a complication when doing this type of analysis. Namely, we should be mindful of the following possibility. Perhaps today’s high debt is not negatively correlated with the growth rate averaged over the next 10 years because the average debt level in the next 10 years is also not particularly high as compared to today. (In statistical parlance, perhaps debt is strongly mean reverting.) This can be checked: we can current debt on the average debt levels in the past and future windows in an analogous fashion as before.

I mentioned the issues of serial correlation of debt and growth levels in passing in my original blog post, which is why I also showed the results with distributed lags, which explicitly controls for the past and future debt levels in the regression. While those fully account for the issues raised here, I think the analysis here showing the serial correlation in debt visually more informative about the patterns in the data.

Of course, there are numerous ways to account for the reverse causality patterns, besides just considering forward-averaged growth rates. One strategy is to explicitly include past growth rates as a control. I did this in my blog post (see the last figure there), as well as in working paper. This is also exactly what Kimball and Wang do in showing the “excess growth” over and beyond what is predicted by past growth. However, I think their graphical approach in actually computing the predicted and excess growth rates based on past growth rates was a very nice way to make the point. At any rate, all these results all suggest effectively no relationship between debt and growth in the post-war sample of advanced industrialized countries that we analyzed. 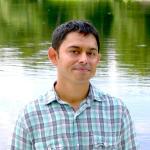