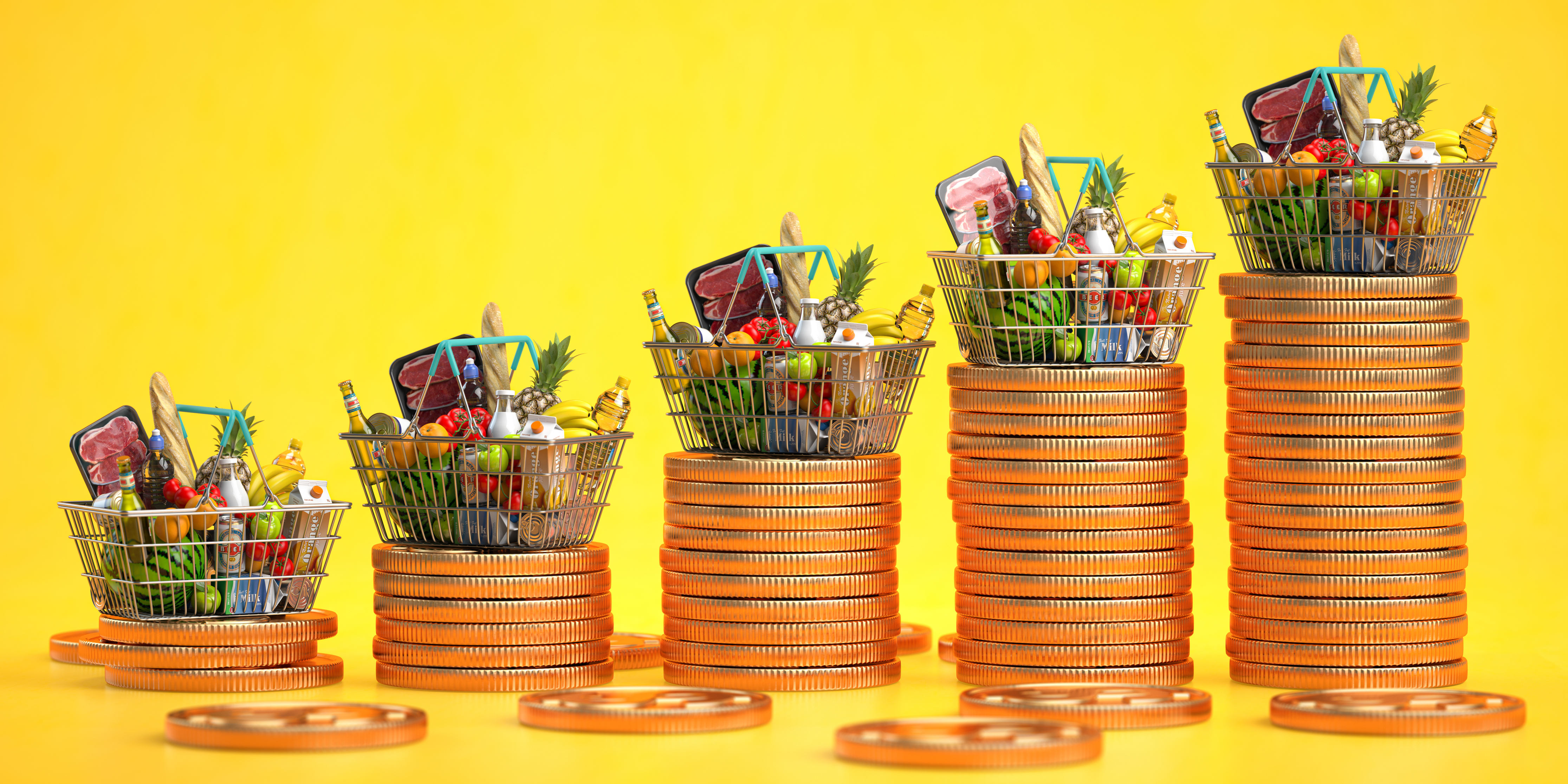 Just in time for the holidays and the winter season, prices are rising at eye-popping rates. Energy costs have leapt 30% in the past 12 months, and food is way up — the price of meat, poultry, fish and eggs together rose almost 12% over the same period.

I have just seen a $14 rotisserie chicken. Okay, it was Manhattan. But still.

All told, the consumer price index surged 6.2% from a year ago in October, the most since December 1990. According to the Labor Department, that wipes out any increases in wages workers have seen, with real wages falling 0.5% from September to October.

Neel Kashkari, the Minneapolis Fed Chair, has just said that it’s going to get worse in the coming months, blaming rising prices on people buying more goods and services with extra money from stimulus checks and also to Covid-related supply chain snags. But it’s a temporary surge, he says. Yet Americans are still nervous – especially since energy and food prices don’t seem to fit that narrative especially well. Do you buy more heating for your home because of a stimulus check you got months ago? Probably not.

So just how serious is the problem and what do we do about it?

Claudia Sahm, a senior fellow at the Jain Family Institute who has worked at the Federal Reserve and the Obama White House, sees higher prices at the pump and the grocery store as a real hardship to ordinary people: “It squeezed the budgets, particularly of low-income households who spend most of their money on necessities.”

In her view, the Fed failed to see just how long it would take to contain the global pandemic. “The highly contagious delta variant disrupted labor markets and supply chains again,” observes Sahm. “Covid is the root of all the problems, and the only lasting solution is a public health one.”

Sahm urges the White House, as well as state and local governments, to get more people vaccinated ASAP through measures like employer mandates and making access to the vaccine easier. Other measures she advocates to keep prices from ticking up further include using the Strategic Oil Reserve, reducing trade tariffs, and continuing to work with ports to speed the processing of goods in the short term.

On the bright side, Sahm sees a helpful buffer in the American Rescue Plan Act of 2021 – namely the “stimulus checks and the new Child Tax Credit which have given families the income necessary to cover the higher prices.” She points out that consumer spending, after accounting for inflation, is increasing more than prices: “That is notably better than after the Great Recession when families got much less relief, and consumer spending grew slowly for years.”

Pia Malaney, Co-Founder and Director of The Center for Innovation, Growth and Society and Senior Economist at the Institute for New Economic Thinking, warns that “wages are not able to keep up and rising food and gas prices are hitting the pocketbooks of many Americans who are still reeling from the pandemic economy.” She notes that this has persuaded some to call for a cutback in proposed spending on Biden’s Build Back Better plan. But it is important to remember, she points out, “that much of the proposed spending will address exactly the labor and supply chain issues that are driving the rise in inflation.”

Malaney is optimistic that money spent on infrastructure will improve roads and transportation, and that help with child care and education “will allow many women to re-enter the workforce, easing the tight labor market that is making it hard for employers to hire.” But she also observes that climate change is already causing costly damage that will have long term effects on economic output if not addressed. “While the rise in inflation is troubling, reigning it in at the cost of long term investments in people and the economy can be even more costly.”

Delft University of Technology’s Servaas Storm also worries that consumer prices are eroding the real incomes of households, resulting in “all-round pessimism and growing recession fears, as shown in a recent CNBC poll).” He warns that if we see a long, cold winter and rising energy prices, U.S. households will increasingly suffer from “fuel poverty” and the number of “winter deaths” will increase. Most households are likely in for a rough ride, he warns.

“All this is likely to lead to anger and upset among the population and to political repercussions for the U.S. mid-term elections in 2022,” predicts Storm. “The recent elections for governor in Virginia may well be the first of more electoral surprises.”

Storm does not believe that the Fed has underestimated the problem. “Officials have been telling anyone who would listen to expect higher, transitory, inflation in the near term as the economy recovers from the COVID-19 crisis and gets back to normal,” says Storm. “And it has not raised interest rates, even with influential observers telling it to do so.”

The Fed thinks the problem is transitory, he notes, but a lot of folks still worry that higher inflation will become entrenched and we will see a rerun of 1970s stagflation, when supply shocks (the two oil crises) triggered a wage-price spiral in a stagnating economy with rising unemployment. “That’s due to a communication error on the part of the Fed,” says Storm. “They made a mistake in avoiding comments on the major role played by food and fuel prices.” Storm thinks that people with such fears are focused on the wrong issue — stagflation is unlikely, he says, because there’s nothing to keep pushing up wages.

“Labor unions in the U.S. have been crushed and no longer constitute a force for wage-cost-push inflation,” he says. “It is true that strikes and work stoppages are rising, but their impact at the macroeconomic level is still negligible.”

He points out that while nominal wages are rising, especially in specific industries where workers left during the pandemic and are reluctant to come back, it’s not nearly enough to offset the sudden increase in cost of living. In his view, we should be looking at how firms in various industries, from retail and manufacturing to biotech, have boosted their profit margins, which inflates prices.

“The Wall Street Journal noted recently that nearly two out of three of the biggest U.S. publicly traded companies have reported fatter profit margins so far this year than they did over the same stretch of 2019, before the pandemic,” observes Storm. “Rising inflation makes it possible for firms to hide their increased profit margins from customers.

“Nearly 100 of these corporations raised profit margins by more than 50%,” says Storm. “Part of the inflation is therefore due to profit-push – and we should blame the oligopolists, rather than the working population.”

Thomas Ferguson, Research Director at the Institute for New Economic Thinking, who has just released a new study on what drove the 2020 election, put it this way: “We don’t’ have a wage-price spiral. We have a price-wage spiral.”

Storm thinks the Fed is right so far in refraining from increasing the interest rate in order to curb inflation. “That’s a blunt instrument which can bring inflation down, but only by depressing consumption and investment demand,” notes Storm. In his view, the problem is not mainly about too much demand, but rather supply-side problems “in very specific global and domestic production chains impacted by the pandemic.”

“Higher interest rates won’t solve bottlenecks in (just-in-time) commodity chains,” he warns, “so instead of solving inflation they will just depress aggregate demand and push the economy into recession.”

Sure, says Storm, a recession will lower inflation. “But it would amount to a clear instance of ‘operation succeeded but patient died.’”

Storm points out that there is another reason why the Fed will remain careful when raising the interest rate, namely “the high indebtedness of U.S. households, banks and corporation in combination with strongly inflated asset markets.” Raising interest rates too quickly, or even at all, could trigger painful financial-sector adjustments and a crash in the dramatically overvalued stock market and derivative markets, he warns. And that could mean “a balance-sheet-restructuring recession of similar proportions to the one following the financial crisis of 2008.”

Bottom line, says Storm, is that the Fed will likely err on the safe side in allowing higher inflation with the hopes that it will be short-lived rather than risking a major crash.

So what to do to help the ordinary people who are hurting? “A sensible policy response to the inflationary pressures would make a distinction between the short run and the long run,” Storm explains. “In the short run, the government can impose temporary price controls (and rationing) on energy, especially.”

He agrees with Sahm that government agencies should act vigorously to unsnarl supply-chain bottlenecks, adding that there should be “mandatory cooperation moves between firms and unions, reversing decades of deregulation, to solve the present trucking crisis, for instance.”

Storm also urges direct income support to the poorest households to compensate for higher energy costs. This could be paid for out of higher taxes imposed on the super-rich (say, the richest 1%-5% of U.S. households or on corporate profits, which in many cases have grown because of higher profit mark-ups).

“The collateral damage of such targeted fiscal interventions would be much smaller than the negative side-effects of higher interest rates, and the distributive implications will be progressive (rather than regressive),” notes Storm.

In the long run, Storm sees the need for increasing the energy efficiency of homes and transportation, as well as expanding the renewable energy supply system and lowering the dependence on fossil fuels. He would also like to see governments curbing speculation in oil, gas and coal futures markets, which he says is now contributing to higher energy prices and inflation. “The Fed can outlaw the trade in socially useless crypto-currencies,” says Storm, noting that “Bitcoin mining consumes around 0.6% of global electricity production, which is roughly equal to the annual energy consumption of the 21.4 million people of Sri Lanka.”

“Of course all these responses require cooperation, coordination and planning between the various actors including the federal government, state governments, the Fed, unions, corporations, the CFTC, and political parties,” Storm points out. “Absent that, we are left with second-best and third-best ersatz-solutions – which will not work.” He warns that how this ends will depend on the vagaries of the coming winter, the fancies of the coronavirus, the speed at which supply-chain bottlenecks will be removed, and the dynamics of heightened political polarization in 2022 and beyond.