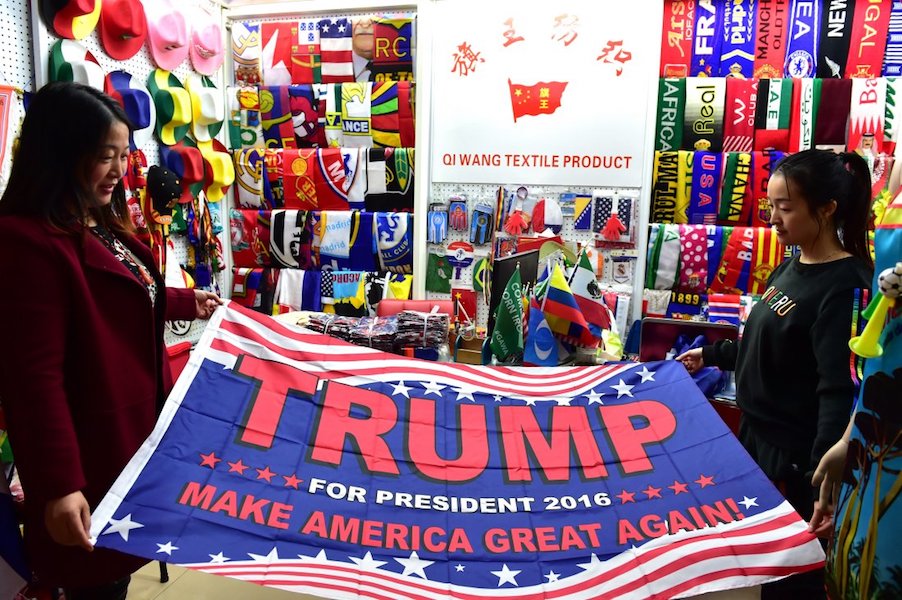 A trade war would undoubtedly hurt both sides. But there is reason to believe that the US has more to lose. If nothing else, the Chinese seem to know precisely which weapons they have available to them. China could stop purchasing US aircraft, impose an embargo.

BEIJING – China exports more to the United States than the US exports to China. That makes US President Donald Trump furious – so furious, in fact, that he may be willing to start a trade war over it.

Trump has leveled tough protectionist threats against China. As he attempts to consolidate his presidency, he is unlikely to back away from them. And with the Communist Party of China’s 19th National Congress set to take place in Beijing in November, Chinese leaders are unlikely to yield to US pressure.

A trade war would undoubtedly hurt both sides. But there is reason to believe that the US has more to lose. If nothing else, the Chinese seem to know precisely which weapons they have available to them.

China could stop purchasing US aircraft, impose an embargo on US soybean products, and dump US Treasury securities and other financial assets. Chinese enterprises could reduce their demand for US business services, and the government could persuade companies not to buy American. The bulk of numerous Fortune 500 companies’ annual sales come from China nowadays – and they already feel increasingly unwelcome.

Beyond being America’s second most important trading partner, China is America’s main jobs supplier. A trade war could thus cost the US millions of jobs. If China switched from Boeing to Airbus, for example, the US would lose some 179,000 jobs. Reduction in US business services would cost another 85,000 jobs. Soybean-producing regions – for example, in Missouri and Mississippi – could lose some 10% of local jobs if China halted imports.

Moreover, though the US exports less to China than vice versa, it is China that controls key components in global supply chains and production networks. Consider the iPhone. While China provides just 4% of value added, it supplies the core components to Apple at low prices. Apple cannot build an iPhone from scratch in the US, so it would have to search for alternative suppliers, raising its production costs considerably. This would give Chinese smartphone businesses an opportunity to seize market share from major players.

Today, 80% of global trade comprises international supply chains. Declining trade costs have allowed firms to splinter their production lines geographically, with goods processed and value added in multiple countries along the chain. If China threw a handful of sand in the gears of these chains, it could disrupt entire production networks, doing serious damage to the US (and, indeed, all the countries participating in such networks).

An escalating trade war, with each side erecting symmetric import barriers, would fuel inflationary pressure in the US, potentially driving the Federal Reserve to raise interest rates higher and faster than it would otherwise. That, together with diminished growth prospects, would depress equity markets, and declining employment and household income could lead to a sizeable loss of GDP in both the US and China.

A more likely scenario, however, is that both countries would initiate disputes in specific sectors, particularly traditional manufacturing industries like iron and steel production. Meanwhile, Trump will continue to accuse China of manipulating its exchange rate, ignoring the recent downward pressure on the renminbi (which indicates that the currency was actually overvalued), not to mention the simple fact that many governments intervene to manage their exchange rates.

Both Japan and Switzerland have engaged in outright currency intervention in recent years, and the US itself may well join their ranks, when the strong dollar’s impact on US export competitiveness becomes untenable. In any case, China can probably forget about achieving “market economy status” under World Trade Organization rules until after Trump is out of the White House.

The trade confrontation between the US and China will also affect bilateral investment flows. The US may cite national security concerns to block Chinese investments. It may also stop government purchases from Chinese companies like Huawei, and force Chinese firms and wealthy individuals to reduce investments that have hitherto bolstered US asset prices.

A high-quality US-China bilateral investment treaty would create a level playing field for American companies, giving them better access to China’s large market. But those talks will invariably be pushed back, while disputes over intellectual property rights and cyber security will be reinvigorated.

For now, China’s leaders seem convinced that they have little reason to bend to US pressure. For one thing, Trump seems more concerned with other priorities, such as repealing the US Affordable Care Act, reforming the tax system, and investing in infrastructure.

Even if a trade war does happen, China’s leaders assume, it probably would not be sustained for long, given the income and job losses that both sides would suffer. In any case, they have no intention of sending any signal of weakness to a leader so intent on testing other’s limits.

For the past five years, China has sought to establish a growth model that is less reliant on exports and more reliant on domestic consumption. But China often needs a crisis or an external shock to drive reform. Perhaps Trump is that shock. While his policies will be bad for China in the short term, they may also provide the impetus China needs to stop subsidizing exports and perpetuating distortions in the domestic economy. If this happens, China may actually emerge from the era of Trump better off than before.