Michelle Holder is an Associate Professor (effective Sept. 2021) of Economics at John Jay College, City University of New York. Prior to joining the John Jay faculty, she worked professionally as an economist for a decade in both the nonprofit and government sectors. Her research focuses on the black community and women of color in the American labor market, and her economic policy reports have been covered by the New York Times, the Wall Street Journal, the New York Amsterdam News, and El Diario. Michelle has also appeared on, or been quoted in, media outlets such as CNN, the Washington Post, NPR, The New Yorker, and PBS. Her first book African American Men and the Labor Market during the Great Recession was released from Palgrave Macmillan in 2017. Michelle’s educational background includes master’s and doctoral degrees in economics from the New School for Social Research in NYC, and a bachelor’s degree in economics from Fordham University. 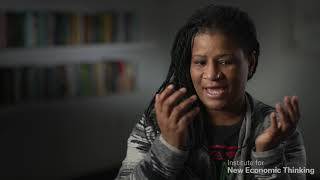 Black women are forfeiting $50 billion/year in the US due to the combined gender and racial wage gap.