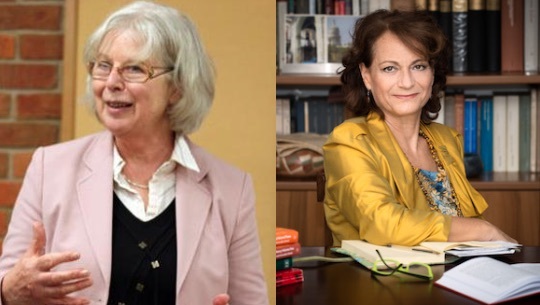 We are delighted to announce the appointment of Sheila Dow and Antonella Stirati to the INET Academic Council. Professor Dow and Professor Stirati bring their scholarly expertise to our organization, providing counsel to INET leadership on research programs, grants, and curriculum materials.

Sheila Dow is Emeritus Professor of Economics at the University of Stirling and Co-Convener of the Scottish Centre for Economic Methodology. She has worked previously as an economist with the Bank of England and the Government of Manitoba and as an advisor on monetary policy to the UK Treasury Select Committee. She has published in the areas of methodology, the history of economic thought (especially Hume, Smith and Keynes), money and banking, and regional finance. Recent books include Foundations for New Economic Thinking: A Collection of Essays(Palgrave Macmillan, 2012), Economic Methodology: An Inquiry (Oxford University Press, 2002), and A History of Scottish Economic Thought (Routledge, 2006), co-edited, with Alexander Dow.

Antonella Stirati is Professor of Economics at Roma Tre University. She studied economics at the University of Siena (laurea in Scienze Economiche), the University of Cambridge (M.Phil degree), and Sapienza University of Rome (PhD). Her research interests are in the fields of output and employment determination, income distribution, and unemployment. She has authored The Theory of Wages in Classical Economics (Elgar, 1994), co-edited the three-volume collection Sraffa and the Reconstruction of Economic Theory, (Palgrave Macmillan, 2013), and published a number of articles in academic journals and collected volumes. Her article on “Inflation, Unemployment and Hysteresis” was selected as one of the 25 best articles published in the Review of Political Economy since the journal was first issued. She is also active in scientific popularization and intervenes in public debates on current issues. She co-edits the online journal Economia e politica.

Please help us to welcome Professor Dow and Professor Stirati to the INET community.