Overwhelming Response to YSI in Berlin: INET’s Class of 2012

We reserved 25 slots, but we got 563 applications. Something had to be done.

So, after carefully selecting the 25, we have been putting our energy into creating something new, that we are calling YSI Commons. The name is meant to evoke the intellectual commons that we all share, a deep and wide well that we collectively tap as a vital resource for facing the challenges of the present. And it is also meant as a reference to the venerable “common room” of traditional universities, a central axis of scholarly society and culture.

In Berlin, our Commons will have an actual physical location, a room in the Adlon Hotel right next to Axica Conference Center. Everyone (yes everyone) who applied to YSI in Berlin has been invited to register for the YSI Commons, which will feature live video of all sessions, scheduled visits by selected speakers, and lots more. We have created a Berlin-based Task Force comprised entirely of Young Scholars specifically for the purpose of building out this new concept.

After Berlin, our common room will relocate to a permanent home on our web page, where we hope it will serve as the central axis of a new scholarly society and culture, a culture organized for new economic thinking. But everything will have started at Berlin.

We are calling them the Class of 2012, the 563 Young Scholars who took the time to tell us what new economic thinking means to them, and why it is so necessary. We used every one of those 563 answers to construct the word bubble below, which we hereby adopt as the logo of the Class of 2012. 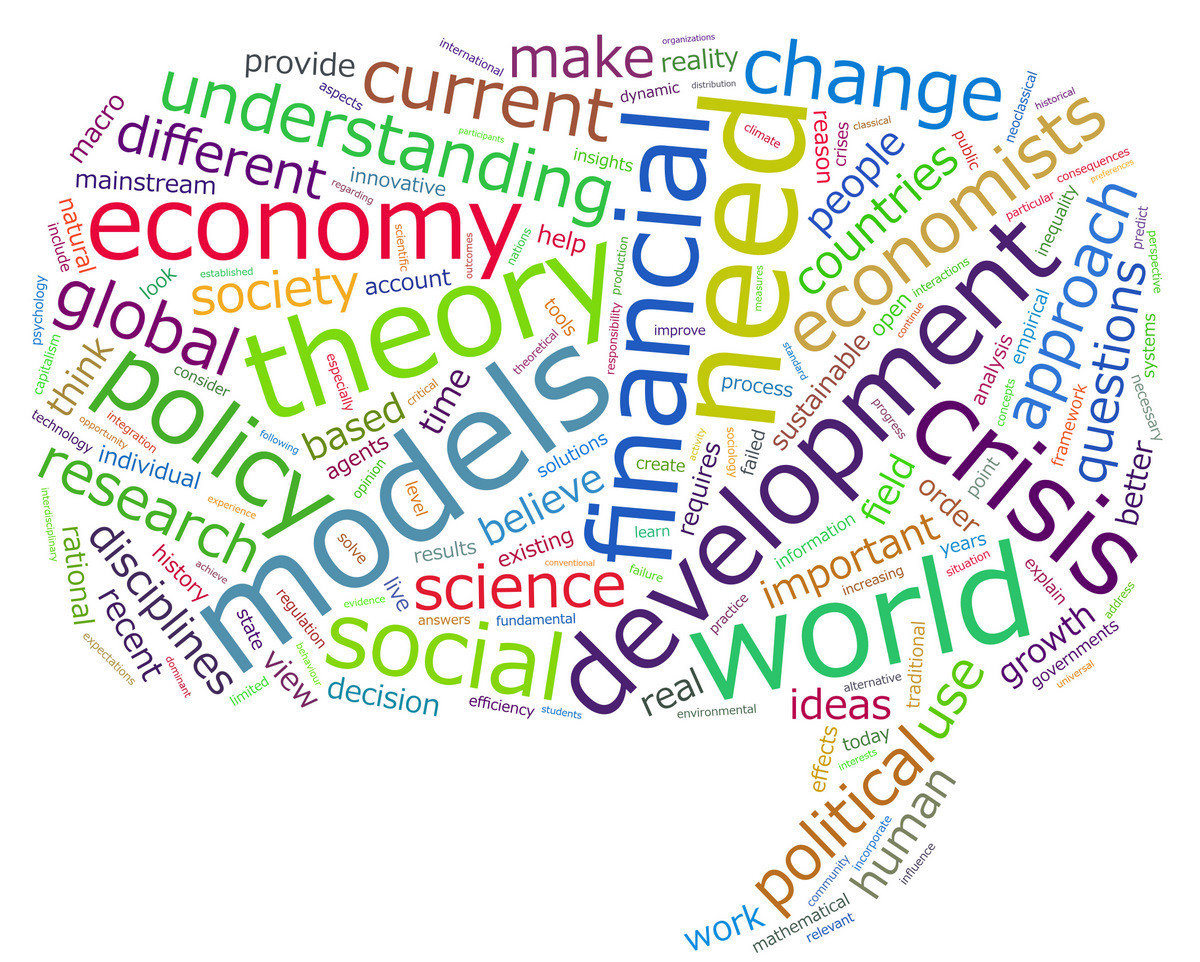 We were able to accommodate only 25 answers in the main Plenary conference, but for each one of them there was something about the answer that intrigued us, that made us imagine, “Here is a future new economic thinker worth watching.”

At INET, new economic thinking means new thinking about the economy, not necessarily by economists. Accordingly, only ten of the twenty-five students chosen state “Economics” or “Finance” as their major field of study, and the rest range from “Anthropology” and “Philosophy” to “Cognitive Science” and “Computational Social Science”. In between, we find “Political Economy”, “Law and Finance”, “Economic History” and “History of Economic Thought”. What all have in common is their sense of adventure, and their commitment to a life spent thinking long and hard about the most fundamental economic problems of our age.

Here are some of their inspiring words:

“By starting with the problem rather than a theory, the researcher may benefit from theories from a wider range of disciplines and engage in mutually beneficial discussions with scholars in other disciplines.”

“Every generation should develop its own new economic thinking. Due to globalization, technological and financial innovations, possibly also due to shifting values, both the types of interactions as well as their timescales undergo changes. Which old models still hold, which do not? Can the increased availability of data and processing power deepen our understanding? These questions I see as challenges for new economic thinking.”

“During the last forty years economics captivated itself in an axiomatic hypothetical theory prison. Freedom of opinion, one of the most fundamental characteristics of an enlightened and pluralistic society, disappeared from the field of economics. New economic thinking is pluralistic and dialogue oriented thinking about the optimal, fair, and sustainable use of resources in society with the help of different methodological approaches, which may also include mathematical axiomatic reasoning.”