Leijonhufvud has questioned the flawed fundamentals of economics. And he has explored the spread of contagion in undermining the web of contracts that are the basis for capitalism.

INET Advisory Board member Axel Leijonhufvud has consistently pointed to the need for new economic thinking to grapple with the novel challenges of our recent economic crises.

Time and again, Leijonhufvud has demonstrated the intellectual firepower to grapple with the world’s most pressing economic issues alongside some of the brightest economic minds on the planet.

This is nothing new, as this classic two-part interview with Nobel laureate Friedrich A. Hayek demonstrates.

Leifjonhufvud asks Hayek about his academic career and intellectual pursuits. First, Hayek talks about his eclectic course of study, which included law, psychology, and the role of environmental influences. Hayek also describes academic discussion groups in Vienna and London, and he defines the Austrian School of Economics while exploring its connections to libertarian philosophy.

Later, Hayek talks with Leijonhufvud about the role of government in private enterprise, the minimum wage, and the private provision of money. Hayek explains that when the government controls the money supply it becomes a tool of the politicians, a situation that is not sustainable in the long run. He also explores his seminal book, Road to Serfdom, which was the springboard to his future studies in political science. Finally, Hayek explains what he sees as the three sources of human values.

You don’t want to miss this amazing conversation between two of the world’s leading economic minds. 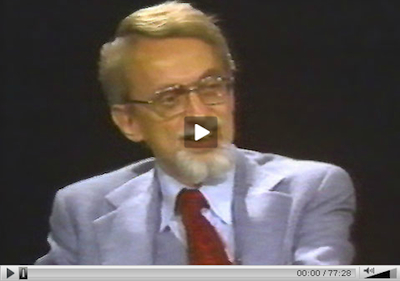